The Altenberg-Zinnwald Mining Landscape is located close to the German-Czech border in the high mountain area of the Eastern Ore Mountains, thirty kilometres south of Dresden. It is the most easterly mining district in the Saxon Ore Mountains and the landscape is characterised by a gently sloping plain with occasional rolling hills and deep river valley dissections that gradually descend to the north. It offers an outstanding example of a multi-layered tin mining landscape that gives evidence to the extraction of different types of tin ore deposits pioneering water management structures, and pioneering technologies in ore processing from the 15th century onwards.

Altenberg contained the largest deposit of tin ore in Central Europe. The mining region is considered a pioneering place in ore processing, from the 15th to the late 20th centuries. Although mining ceased in 1991, the landscape still documents the relationship between the long lasting mining activities, the development of agriculture and mining settlements as well as environmental impact of mining.

The ore crushing and concentration facility Wäsche IV is located at the head of the Tiefenbach valley, some 250 meters southeast of the rim of Altenberger Pinge. The technical monument is exceptional testimony to the technology of wet stamping: pounding as opposed to grinding, with the innovation of introducing water to the ore during crushing. This process was developed in the Ore Mountains in the 16th century, and became the principal method applied to profitably treat high-volume and low-grade tin ores of the Altenberg-Zinnwald Mining Landscape. The invention was rapidly adopted in the rich tin mining fields of Cornwall, Great Britain, where it revolutionised ore recovery and output. The method subsequently diffused worldwide and could be applied to other ores.

The facility, in addition to its stamp mill, contains a complete system of ore concentration. Following the end of operations in 1952, Wäsche IV was opened as a museum in 1957.

The Vereinigt Zwitterfeld zu Zinnwald mine was exploited from the 15th century onwards, and large mine structures are preserved underground documenting the mining technologies of the 18th and 19th centuries.

The mine is publicly accessible and its preserved underground workings provide excellent examples of processing methods used in the 16th and subsequent centuries together with a range of structural geological and mineralogical exposures that reveal the nature of the tin deposit and the way it was exploited.

The inventive techniques for processing rocks and extracting ore in this region attest to the determination and ingenuity of humankind in adapting to overcome their limitations through technological advancement. These processes at the time of their first use were a height of mining technology, bringing progress and innovations which would reverberate throughout the world. The participants had the opportunity to be in close interaction with the tools and the processes which forged the nature and history of this cultural mining landscape.

One of the worksites at the ore crushing and concentration facility, where the hammers of the wet stamping process developed in the Ore Mountains in the 16th century are still located. The work involved repairing the main support structures of the hammers, which were underneath the ground. For this reason, the participants first had to dig out the base of the structure in order to uncover the foundations. Once this task was done, they proceeded to document the state of the wooden elements and to help replace the damaged or rotten pieces with new elements. The works were led by a master of carpentry who has additional education as “Restorer in Handicraft”. Through his guidance, the participants were able to have a glimpse into the traditional skill of wood craftsmanship.

The second worksite of the project revolved around the visitor’s mine, a museum dedicated to illustrating the unique mining techniques utilised during the middle ages for stone cracking through fire developed in the Ore Mountains. The main task to be accomplished by the participants was to help prepare an area of the underground museum to allow more space for the exhibition. The participants were tasked to removing debris and cleaning out hollowed cavities where the exhibition of the Feuersetzen (setting for fire) technique can be showcased to the public.

In the early centuries of mining until the middle of the 19th century, Feuersetzen was the dominant ore mining method for extracting tin ore alongside the hammer and iron work. The comparatively hard tin-containing rock was heated by burning wood until cracks were formed due to thermal stresses. In some cases, the rock collapsed on its own, in others the rock exploded due to thermal shock when water was poured. This cooled down the rocks and allowed the miners to cut it off more easily. Setting the fire was not without danger, but it was the most efficient method to blast open rocks and to carve mountains before the appearance of explosives.

After the area was cleared up for the exhibition, the participants helped set up the wood logs and materials to recreate there the technique. Through careful review of evidence and historical material, the professionals working at the museum guided a careful recreation of the Feuersetzen technique as a real experience for the visitors to view. The method will now be showcased through this historical reconstruction at a new show location prepared by the participants.

The project has been organised by European Heritage Volunteers, in partnership with the Sächsische Welterbekoordination – the Saxon World Heritage Coordination, the Bergbaumuseum Altenberg – Altenberg Mining Museum and the Besucherbergwerk Zinnwald – Zinnwald Visitor Mine and supported by the Kulturstiftung des Freistaates Sachsen – the Cultural Foundation of the Free State of Saxony. 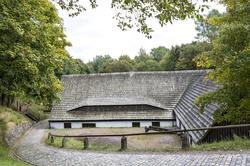 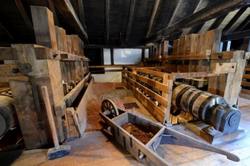 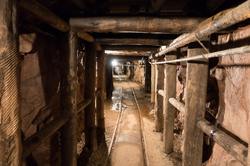