Bois-du-Luc is one of the four Major Mining Sites of Wallonia listed as UNESCO World Heritage Site since 2012. The Bois-du-Luc mining site, together with the Grand-Hornu, Bois du Cazier and Blegny-Mine sites, represent the best preserved coal mines in Belgium from the early 19th century to the second half of the 20th century. The Walloon Coal Basin is one of the oldest and most symbolic sites of the industrial revolution in Europe. The four sites include numerous technological and industrial remains, relating both to the surface and the underground coal mining industry, and to the industrial architecture associated with the mines: the remains allow insight into workers’ housing, urban planning of mining towns and the social and human values associated with their history.

During the 19th century, the Société des Charbonnages du Bois-du-Luc founded the Saint-Emmanuel mining pit and constructed a unique village nearby. One could take part in various activities at the village, which was supervised by a director: from purchasing food and drink at the grocery, butchers, mill and brewery, to getting treatment both at home and at the hospital, from relaxing in the park and at the
kiosk, to getting an education both at school and in church.

The Bois-du-Luc mining site is an exceptional example from the industrial era. The integrity and the authenticity of its heritage are unique, and it clearly demonstrates the impact of industry on technology, landscape architecture and society.

Bois-du-Luc is a key location on the European Route of Industrial Heritage. The site also portrays the important migration of Flemish, Poles, Italians, Greeks, Moroccans, Turks and others to Walloon coal mines.

The mining site was closed down in 1959 and twenty years later the „Societé du Bois-du-Luc“ was no longer in existence. People still live in the mining settlement; indeed they were the first to demand that the historical buildings be preserved.

Today the pithead site has been completely restored and houses the Bois-du-Luc Ecomuseum. The Ecomuseum was founded in 1983 and demonstrates the hope for participation and interest of the local population in the conservation of the site. It aims to record everything that the architecture, landscape and inhabitants of the central Belgian area, „Le Centre“, have to tell us about the history of the coal mining period.

The project aims to contribute to the preservation and protection of the historical site, as well as to raise awareness of its cultural and historical importance among international volunteers, the local community and visitors.

A special aim of the project is to support the Ecomuseum of Bois-du-Luc in its preparation of a special exhibition as part of “Mons 2015”. The city of Mons, which is located close to the site, has been elected as the European Capital of Culture for 2015, along with Plzen in the Czech Republic.

The main practical activities of the project carried out by the volunteers are the preservation of the site by cleaning the area and removing the overgrown grass. Additionally, the volunteers prepare and paint rooms originally used as horses’ stables, which will host the exhibition of “Mons 2015”.

The young volunteers also participate in workshops about World Heritage and related themes and visit other UNESCO World Heritage Sites in the surrounding area.

A special focus of the project is the emphasis on the role of labour migration in the past and present and its relationship with historical areas and industrial heritage. An associated exhibition was prepared by the photographer and reporter Charles Henneghien about Moroccan miners and was shown in the Ecomuseum. Additionally, several workshops were held concerning this topic.

The World Heritage Volunteers project aims to raise awareness among young people and the local population about World Heritage. To this effect, the group takes part in activities with local children; they play games and discuss World Heritage using pedagogical tools as part of a specific project in the housing estate of Bois-du-Luc.

The project finishes with a public presentation at the Ecomuseum which shows the results of the work of the World Heritage Volunteers.

The project is jointly organised by JAVVA (Jeunes Actifs dans le Volontariat et les Voyages Alternatifs), a regional youth organisation working in the French-speaking part of Belgium, and the Ecomuseum Bois-du-Luc, with the support of the Province of Hainaut and the City of La Louvière. 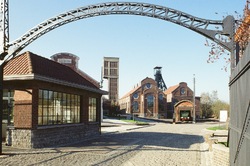 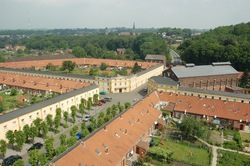 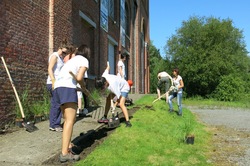 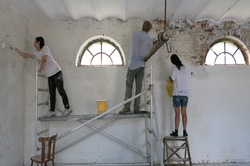 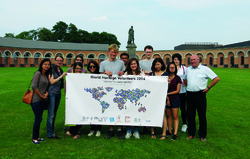