With nearly 2,000 years of urban history, Évora is a city of huge historical importance. It is one of the few cities in which it is still possible to see ancient Portuguese architectural remains and consequently it was listed as a UNESCO World Heritage Site in 1986. Visitors to Évora will be impressed by the Roman temples which have survived alongside the remains of a medieval castle, Gothic-Mudejar palaces and baroque buildings. Évora is particularly attractive for the reason that here it is possible to see architecture from many different centuries and civilisations.

A splendid temple, ruins of baths and a residence remain from the Roman era. The year 914 saw great urban development; several mosques were built, as was a large fortress at the highest point of the city, which would develop into the medieval castle in the late 12th century. The Christian conquest in 1165 led to the construction of a cathedral in 1185 and the adaptation of the Muslim fortress to serve as a castle. The 13th century saw further urban expansion and by the 15th century Évora was the most important city in the southern region of the Portuguese empire. The layout of the historical centre at this time remains today.

Évora came to be the residence of the King from 1383 and the city almost tripled in size in just 100 years, with many more churches and monasteries being built during this time. The 16th century saw extraordinary building activity, including the construction of Saint Francis convent, the Royal Palace, the remarkable Church and Convent of Our Lady of Grace and the Church of St. Anthony, as well as what is celebrated as one of the most extraordinary feats of Portuguese engineering of the 16th century; the Aqueduct of the Silver Water. Évora was the capital of Portugal for a short time, serving as King John III’s exclusive residence from 1531 to 1535. The first archbishop of the city sponsored the establishment of the university, transforming Évora into one of the main cultural centres of 16th century Portugal.

With political upheaval, the introduction of new technology and modern civic values, the 19th century was a new turning point for the city, which was fortified with huge strongholds that can still be seen today. In the 20th century, the Museum of Évora was founded and a process of widespread heritage and cultural awareness began, with the local population starting to appreciate the uniqueness of their ancient city, thanks to the foundation of the first heritage protection association in Portugal, the Pro-Évora Group, in 1919.

Évora’s diverse and authentic architectural heritage makes it one of the biggest classified historical cities in the Iberian Peninsula. It could perhaps be described as a ”Museum City”: inside the old walled town, there are 199 historical monuments classified and protected by national and municipal legislation.

Alongside its architectural heritage, remarkable popular dwellings can still be seen in the historical centre of Évora. They have been preserved in their original form with original materials through the use of traditional techniques. The World Heritage Volunteers project reinforces the idea that it is essential to preserve this knowledge and ensure the continued use of traditional techniques, thus preserving Évora’s historical and cultural heritage.

The programme trains the volunteers in whitewashing in two main stages: first they are taught about the properties and preparation of limestone by a limestone expert and then they receive training in the techniques of limestone application. Throughout the whole process, the volunteers are accompanied by local technicians, who ensure that the task is carried out properly.

The project also includes workshops in fresco painting and coloured pigment techniques, so that the volunteers understand the various potential possibilities of limestone application. As part of the project there is also a series of guided tours linked to the local geology and the conservation laboratory, a state of the art facility which informs the volunteers of the problems presented today by the preservation of historical sites.

Already in the first year of the project in the historical centre, more than 60 volunteers took part, engaging with the local community and carrying out the limestone application, thus contributing to the cleaning and conservation of the city and raising awareness among the local population.

In the second year the project was repeated and the international aspect of the project developed - volunteers from eight different countries participated in the project.

The project has been organised by the Municipality of Évora in cooperation with several youth organisations and other local partners. 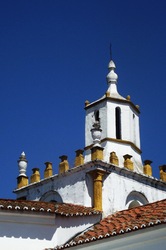 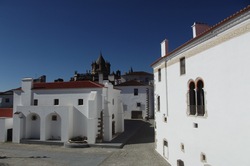 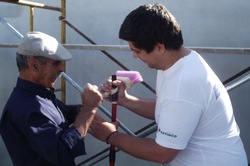 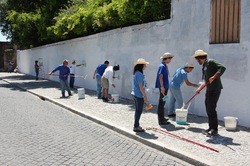 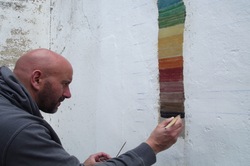 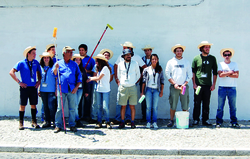