One of the houses at Museum Village Düppel needs a new roof quite urgently. At the moment, all roofs are thatched with reeds, however in order to make the visitors understand better that the roof covering is open to interpretation, as it was not discovered during the archaeological excavations, we want to show different types of roofs. As part of this project, the roof of one of the smaller houses will be covered with wood shingles. Volunteers will learn to work with medieval tools, taking off bark of thin beams to renew the sub-roof construction. For shingle production, beam sections of about seventy centimeters length will be split with shingle splitters and carved with a drawknife. To cover the roof, shingles are layered onto the sub construction and fixed with wooden nails. Volunteers will be able to take part in every step of the process, learning to rebuild an entire roof the medieval way.

The houses are not only made from wood, walls and floors are also made from clay. In order to experience the whole repertoire of medieval house building, there will also be a clay project. Working with clay is always fun, the mixing can be done with bare feet. The techniques for different wall types and a rammed earth floor are subtly different.

Wood and clay working specialists will share their experience and knowledge with the volunteers, passing on old techniques and therefore helping to keep them alive.

Although this kind of work is a lot of fun, it cannot be all work. There will be plenty of opportunities to sit around a fire in the evenings, to talk about the day’s work, to get to know the fellow volunteers, employees and the volunteers of the Museum Association. Especially at weekends, the museum volunteers bring the houses to live when they cook, sow, weave and carve in medieval dress. Thus, the museum is a wonderful oasis in the busy capitol of Berlin.

The project will take place from July, 21st, to August, 3rd, 2019 and is organized by European Heritage Volunteers, in collaboration with Museum Village Düppel as a part of the City Museum Berlin. 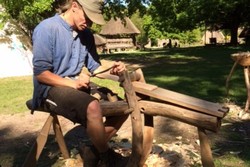