Cistercian monastery landscapes are a special kind of historical cultural landscapes. As such, they are a unique expression of European identity. As defined by UNESCO and the European Landscape Convention, the cultural landscape is a common work of man and nature in the course of history. Cultural landscapes represent the most comprehensive examples of built heritage, as they contain monuments, historic structures, villages, sometimes cities and natural elements that together create vast collection of relevant components spread through a territory.

Cistercian monastery landscapes reflect the forms and techniques of land use and settlement strategies employed by the Cistercian religious order, their adaptation to natural conditions and their strict spiritual guidelines. The historical cultural landscape is the bearer of this history, identity and of the vision the first Cistercians had for a place to cultivate and call home. For this reason, the local inhabitants believe that awareness raising, appreciation and preservation are essential goals for their landscape. The rich story of the Cistercian land-works is set with the background of magnificent scenery with soft rolling hills and charming little villages of lower-Franconia in northern Bavaria, very close to world famous towns in one of the most representative regions of Germany.

In 1500, the Ebrach Monastery established a monastery office in Mainstockheim. The place was administered by the Margraves of Ansbach, the Ebrach Abbey and the Lords of Fuchs. The joint administration lasted until the place became a property of the government of Bavaria in the course of the secularization process in 1806.

A year later, the courtyard went into private hands and subsequently changed owners several times. The Brandner family acquired the Ebrach Court in 1961. After extensive renovations, the retirement home “Ebracher Hof” was opened there and is now home to elderly people. The garden remains open to the public.

The Ebrach Abbot John Dressel built the Amtshof or tithe house from 1618 to 1630. The painted stucco decoration from the original period of its construction has been preserved in the chapel.

An impressive garden was created between 1727 and 1734 under Abbot Wilhelm Sölner von Ebrach. The courtyard is classified as a monument by the Bavarian State Office for the Preservation of Monuments. The rectangular complex with corner towers has richly structured Renaissance gables and an elaborate portal.

The work of the participants will be centred on the historical garden of Ebrach Court. The architectural elements in the historical garden serve as identifying features which describe the progression of the uses given to the place by their subsequent owners. These kinds of elements are therefore key markers that document the history of the site within this cultural landscape. The relevance of their preservation is consequently relevant to secure the integrity and authenticity of the property.

Time has taken its toll on the place and a historical staircase needs urgent intervention. Work on this element will be the one of the main tasks. Firstly, the participants will document the Baroque structure before initiating the work of deconstructing the staircase. Once it will be deconstructed, the participants will lay a new foundation and reassemble the structure. Additionally, stone conservation work on damaged parts will be carried out. The activities on the staircase will showcase for the participants not only an understanding of the Baroque period in the garden, but also about the techniques of conservation for such elements in the context of this kind of garden.

As mentioned, the garden transitioned along the epochs of its owners, and some elements became centrepieces in this historical evolutionary process for this historical garden. During the 19th century, a statement of the time was the tea drinking culture and the spaces to socialize while consuming it. For this reason, a Tea Pavilion was built on the surrounding wall replacing the former gate.

Conservation works on the structure of the Tea Pavilion have been carried out in previous years, however they were not completed. The task will be to finish the restoration of the outside elements by repairing the façade and applying paint. In the interior of the small pavilion the wooden floor shall be restored, the clay plaster completed and the walls painted.

As a way to reutilize spaces and readapt heritage structures along the changing nature of the sites and times, the final aim of the interventions is to refurbish the Tea Pavilion and turn the structure into a public information point about the Cistercian Cultural Landscape in general and the historical Ebrach garden in particular.

The project will take place from August 30th tilll September, 12th, 2020 and is organised by European Heritage Volunteers, in cooperation with Ebracher Hof Mainstockheim  and Cisterscapes – Cistercian Landscapes connecting Europe. 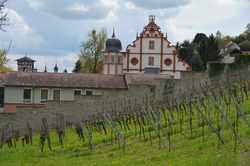 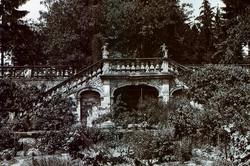 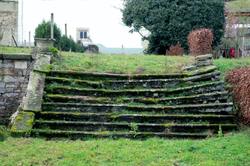