A Jewish community in Halberstadt had existed since 13th century. Around the year 1700 the famous royal resident of Poland and agent or the Saxon court, Berend Lehmann, established a house of learning, the so called “Klaussynagogue”. The community was characterised by eruditeness and developed from the middle of the 19th century on into one of the centres of the Jewish orthodoxy. Distinguished rabbis as Eger, Auerbach, Hildesheimer and Hirsch that are inseparable connected with Halberstadt transformed it into one of the most important Jewish communities in Middle Germany.

The three Jewish cemeteries in Halberstadt with in total more than 1,000 grave stones from a period of more than 300 years sire of the clarity of past days. The inscriptions represent a value that has to be saved for upcoming generations and is still waiting to be discovered.

The Baroque grave stones at the oldest cemetery are rich decorated and therefore very important from the art history point of view. Important persons as Berend Lehmann are buried at this cemetery, the inscriptions provide an impression about 200 years history of the Jewish community in Halberstadt.

The European Heritage Volunteers Project is the continuation of a similar project that had taken place in 2018.

In addition, that part of the cemetery that had in 2018 not been accessible due to the high vegetation will be measured and the exact position of every grave stone will be marked. The so completed plan will serve as base for the detailed documentation of the remaining 15 % of the grave stones at the oldest cemetery. In continuation of the 2018 project the documentation will include a digital photographic part and a verbal part and may be complemented at one or the other grave stone by manual drawings.

The works at cemetery Nr. 2 will be comparable except the clearance of the vegetation since the gravestones are significantly better accessible than those at the oldest cemetery.

Within the framework of collaboration with Technical University Braunschweig a special scan technology will be used at selected gravestones at the oldest cemetery that enables to make parts of the inscriptions readable that are due to erosion already not readable by human eyes.

The project will take place from August, 17th, to August, 31st, 2019, and is organized by European Heritage Volunteers, in cooperation with Moses Mendelssohn Academy Halberstadt and the Jewish Congregation Magdeburg. 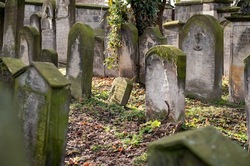 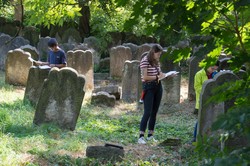 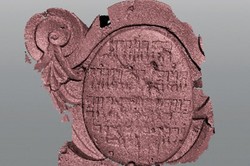