Tematín Castle is situated on a side ridge of the Považský Inovec mountain range at an altitude of 605 above the sea level. It was built in the 13th century under the spell of the Tartar invasion and served as both guard and refuge in case of threat. It was part of the chain of border castles, with important documents of the estate, ranging from deeds of ownership up to litigation documents, having been kept in its bowels. As one of the few castles in Slovakia, it was built far from any settlements and is now considered one of the least accessible castles in Slovakia. It witnessed several battles due to which it was partly damaged, but never conquered. It began losing its renown of unconquerable fortress towards the end of the 18th century, since the nobility were at that time building more luxurious and more comfortable mansions in the lowlands. In the year 1710, it was surrendered to the imperial troops which devastated it noticeably.

As to the early history of Tematín Castle, archaeological research indicates that the first brick buildings of the castle were built around the year 1250. Around the year 1300, Matúš Čák Trenčiansky acquired it in his possession, however, no documentary evidence confirming the fact has been preserved. The large defense tower of the castle, built around the year 1311, falls within the period of his rule. The first documentary evidence of Tematín Castle is to be found in the written instruments of the year 1347 when King Louis I donated it to Vavrinec Tót of Raholec, the administrator of the counties of Nitra, Wallachia, and Sopron. The individual parts of the castle were changing their owners over time, such as the houses of Thurzo, Rottal, Čáki, Beréni, and Berčéni mainly known for Mikuláš.

After the suppression of the uprising and the prosecution of Mikuláš, the castle was damaged by the imperial troops in the year 1710. Despite that, some of its parts continued to be operative, as evidenced by the documents of the year 1716. The last written document – the castle property inventory – dates back in the year 1721. It says therein that the castle was devoid of any property and that it was no longer manned or guarded.

As of the year 2007, the castle has remained in the care of the Tematín Castle Association. With the help of volunteers and staff, its members explore and preserve the castle. During the years elapsed by now, they have managed to stabilize several objects of the castle before their complete downfall. The ambition is to maintain the atmosphere of the castle as part of the beautiful countryside in which it is situated and protect in this way the original of our ancestors without allowing any massive interferences and building new formations by current developers. In performing the necessary work, they proceed by employing the contemporaneous construction procedures of the mortar composition and by the traditional ways laying the stone.

The project will focus on traditional technologies of stone and brick masonry.

The preservation works will be carried out directly at the historic walls and vaults of the medieval buildings which have been rebuilt and changed in Renaissance style, where the stone – and at vaults the brick – are the dominant building materials. Under the supervision of experts and skilled craftsmen in the field of cultural heritage restoration the volunteers will take part in the whole process, from lime preparation and lime burning, mortar mixing and stone selection up to stone laying technology in stonework. Pointing of historic masonry will be part of masonry work, too.

In addition, the participants will be involved in the process of preserving historic plasters, stabilizing sandstone architectural elements and traditional carpentry.

The practical work will be prepared, preceded and complemented by theoretical instruction.

The project will take place from August, 18th, to August, 31st, 2019 and is organized by the Tematin Castle Association, in partnership with European Heritage Volunteers. 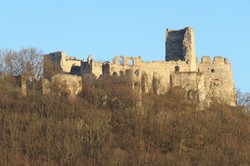 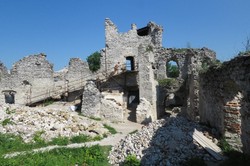 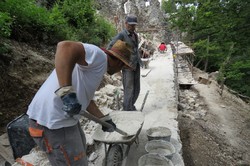