Caričin Grad – Iustiniana Prima is located in south-east Serbia, on the slopes of Mount Radan, near the town of Lebane.

The first archaeological excavations of Caričin Grad began in 1912 and have been going on to the present day.

Based upon the obtained results and historic sources, the first theories about the name of the settlement and the period of its existence have been made. It has been established I the meantime that it is a town of Iustiniana Prima, built by the Byzantine emperor Justinian I. (527 – 565) near the place he was born. By the order of the emperor a new administrative and archbishopric seat of the Illyricum province was built, so as to strengthen the rule of Byzantium and to help to spread Christianity. The settlement was not to last long, and its disappearance is associated with the emperor Heraclius (610 – 641) and the invasions of Slavic tribes.

Although this town was being in use only for a very short period and after that completely abandoned it displays an early Byzantine manner of urban planning, functional and infrastructural organization, adjustments to and the use of the land configuration.

Archeological excavations at Caričin Grad – Iustiana Prima last for more than hundred years now, but conservation works were not carried out on the same scale during this period of time.

In 2011, the documentation of the site was submitted to be placed at the World Heritage Tentative List. But since that time conservation works were completely stopped, rather than being intensified concerning the preparation process to enter the World Heritage List. Therefore it is very important to start the conservation process again and to raise awareness on these matters.

The site of Iustiniana Prima covers the area of more than ten hectars inside the fortification walls, approximately 60 % of the total area of the town discovered so far has been researched, at approximately 30% of the excavated structures a kind of conservation activities have been undertaken, but only only 5% of them are currently in satisfactory condition.

Among many other buildings and structures Caričin Grad – Iustiniana Prima has eight churches which are quite different in their construction design. All of them are representative examples of early Byzantine sacral architecture, especially because of their interior decorations – decorative stone elements and mosaic floors.

Despite their historical value both segments are completily uncovered in terms of conservation: Dozens of beautiful capitals and bases have been left and forgotten at the site for decades now. Except few pieces which were placed in museums the others are scattered all around and were never documented or treated with any conservation method since they had been excavated so that their current state is disastrous.

During the European Heritage Volunteers Partner Project a rescue for this precious part of Iustiniana Prima has been provided, starting from the main point – the Acropolis and the Episcopal church. More than 150 elements have been located, photographed in situ, cleaned and recorded as well by photo as in written form. The result is a complete data-base that will be usefull for any further conservatory actions as well as for further research.

The activities have been led by experts of the Institut for Culture Heritage Preservation Nis experienced in the fields of management of the archaeological sites and of stone conservation. 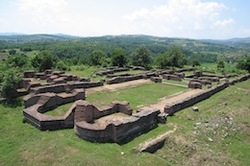 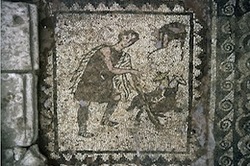