The word azulejo (in English: tile) is deeply rooted in Lisbon and stands as part of the cultural heritage of the city. Of Arabic origin, azulejo (az-zulayj, meaning "polished stone”) is a decorative and utilitarian ceramic tile. Although it is not a Portuguese invention, its functional and cultural use was imaginatively and consistently in Portugal.

Introduced in the 15th century, it became a testimony of the country’s history, through its patterns and inscribed figures. While it illustrates religious figures to historical moments, its contemporary use enhances the versatility of such ceramic piece. Nowadays, they are everywhere in the city, decorating walls of churches and monasteries, to palaces, facades of residential buildings, fountains and gardens, markets and traditional shops, railway stations and other public and social equipment’s. ​

Its integration on the facades of the buildings is due to its technical function and consequent protection of the building itself. Additionally, the decorative purpose of tiles brings brightness to the streets of Lisbon, through its brilliantly colored geometric designs. In the city's old historical districts, cracked tiles on time-worn buildings offer the same visual relief they did centuries ago. Here, as in all of Portugal, azulejos are well worn with time, and remain to record them.

The Divisão de Salvaguarda do Património Cultural – Câmara Municipal de Lisboa (Division of Safeguard Cultural Heritage – Lisbon’s City Council) develops an important work in safeguarding the azulejos of the city, by providing technical and historical-artistic advices, determining the state of conservation and conceiving projects of curative and preventive conservation.

Nowadays, tiles are at risk, due to numerous reasons such as poor state of conservation of the buildings, negligence and theft. In this way, it is urgent to prevent the disappearance of this fragile heritage.

Currently, the Bank of Azulejos is being created, which will be an important tool for the preservation of Lisbon’s tiles and respective urban landscape. The Bank, located in a local storage place, will be responsible for collecting, receiving and restoring tiles from buildings which are under construction or renovation. Then, the inventory will be available, and citizens who intend to re-use them in their own buildings, will be able to request tiles, free of cost. In this way, a cycle is created, where tiles are safeguarded and brought back to the buildings of the city.

The aim of the European Heritage Volunteering Partner Project was to share this unique heritage and to raise awareness for the importance of its conservation, which patterns and colours greatly contribute to the “Light of Lisbon”.

The volunteers learned and carried out all different stages of the process of conserving tiles – collecting, restoring, identifying and correctly storing. They worked on two different working places. One was in the City Council’s building, where a restoration workshop is located. Here, the tiles coming from buildings under construction are delivered. The participants collected and identified each tile, according to the place of origin, the pattern and other aspects. This task had been carried out with the help of a camera, photos and a proper glossary with specific terms related with this type of heritage. The tiles have been cleaned and restored, according to the physical state of the every particular tile.

The second working place was be in a warehouse where the Bank of Azulejos and the storage place are located. Here, the participants stored the azulejos after the restoration process according to a logical disposal and thus enabled their respective identification.

The participants were able to work in both places, where two work instructors assisted with the different tasks.

The project has been organized by Câmara Municipal de Lisboa, Divisâo de Salvaguarda do Património Cultural, in partnerhsip with European Heritage Volunteers. 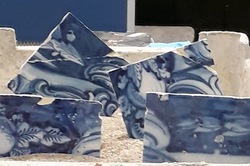