The heritage site comprises the city of Venice and its lagoon situated in the Veneto Region in the North-East of Italy. In this lagoon covering 50,000 square kilometres, nature and history have been closely linked since the 5th century when Venetian populations, to escape barbarian raids, found refuge on the sandy islands. These temporary settlements gradually became permanent and the initial refuge of the land-dwelling peasants and fishermen became a maritime power. Because of its outstanding value Venice and its lagoon had been in 1987 inscribed in the UNESCO World Heritage list.

Venice and its lagoon landscape is the result of a dynamic process which illustrates the interaction between people and the ecosystem of their natural environment over time: the city is built on 118 small islands and seems to float on the waters of the lagoon, composing an unforgettable landscape.

Besides the countless architectural and artistic masterpieces, Venice has a precious natural value. In the Mediterranean area, the lagoon of Venice represents an outstanding example of a semi-lacustral habitat which has become vulnerable as a result of irreversible natural and climate changes. In this coherent ecosystem where the muddy shelves – alternately above and below water level – are as important as the islands, pile-dwellings, fishing villages and rice-fields need to be protected no less than the palaces and churches.

The phenomenon of high water is a threat to the integrity of cultural, environmental and landscape values of the property as it has a significant impact on the morphology and landscape configuration of the lagoon due to the erosion of the seabed and of the salt marshes. These threats are recognized as a priority in the Management Plan which includes a specific monitoring system.

The Management Plan contains many projects for communication and participation in decision-making and for the implementation of the objectives of protection and enhancement of the property. A specific Action Plan focuses on awareness building, communication, promotion, education and training in order to develop a greater awareness among the citizens on the Outstanding Universal Value of the heritage site. Provincial plans deal with the synergies between the preservation and development of the environment and the traditional economic activities and tourism, aimed at the sustainable valorisation of the property, intersecting issues relevant to both cultural heritage and environmental values.

Venice and its Lagoon with their delicate ecosystem are attacked every day by a huge amount of garbage that enhances environmental damage.

Legambiente Venezia and Ispra Chioggia – the local branch of The Italian National Institute for Environmental Protection and Research – were organising with “Don't Waste Venice” the first monitoring activity of floating litter in Venice's canals aiming to gather as many information as possible on the amount and the kind of litter and debris as well as to clean particular areas from waste. In 2015 the project had taken place for the first time; in 2016 it was repeated and developed – the area of activities was enlarged from the city to the islands of the lagoon belonging to the Northern Lagoon Regional Park recently created by Venice's municipality.

The national and international volunteers participated in the land and water monitoring activities, in cleaning and maintenance of the smaller islands of the lagoon, many of them abandoned to degradation.

Most of the activities were carried out in Certosa Island, situated in a strategic position – at the same time in the port’s entrance and in the city – in the middle between Venice historic centre and high sea. Form 1200 to 1500 the island hosted a convent, later it was used for military purposes and from 1950 on, after the demilitarisation process, it was abandoned.

The volunteers’ concrete activities were monitoring and collection of floating garbage as well as sank and stranded waste by boat within the internal areas of the lagoon, on beaches and islands and by foot in Venice’s historical centre. Furthermore, the volunteers supported Legambiente’s local group spreading information material, sensitising citizens, tourists and visitors about the threats for lagoon, teaching them respect towards the heritage site and disseminating good practices towards a collective responsibility for our common heritage.

The project has been organized by Legambiente Venezia and Ispra Chioggia, in partnership with European Heritage Volunteers. 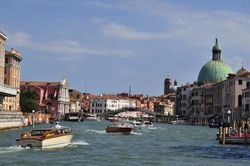 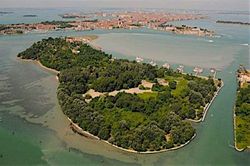 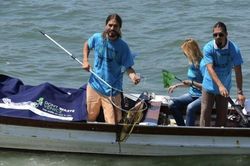 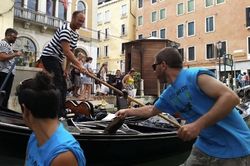 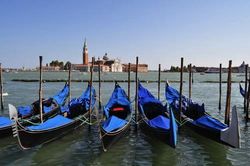