The castle of Coucy’s ruins are located on a promontory which dominates the Oise and the Ailette valleys, between the region of Soissons and the region of Laon. It was constructed at the beginning of the 13th century by Enguerrand of Coucy, called "the Builder". With its huge keep as high as the cathedral Notre-Dame’s tower, the castle was part of a group of fortified constructions. Joined to the Crown in the 16th century and demolished by Mazarin in 1652, the fortress was reinforced by Viollet-le-Duc before being seriously damaged during the First World War.

The château and fortifications formed one of the largest defensive structures ever constructed in France. Spreading over fourteen hectares, Coucy originally included thirty three towers and ramparts stretching over two kilometres. The four main corner towers were similar in size to the central keep of the royal palace of the Louvre while the keep at Coucy was the largest castle tower in Christendom. Standing on a rocky promontory, the ruins remain an impressive and evocative reminder of Coucy’s grandeur despite being badly damaged in the First World War.

Château de Coucy is classified as one of the National Monuments. It has been listed as a historic monument by the French Ministry of Culture since 1862.

The “Association de Mise en Valeur du Château de Coucy”, member of the Union REMPART, has been restoring for more than thirty years the two kilometres long ramparts in Coucy.

The first aim was to restore the ancient covered way and to pass on old building techniques to younger generations. With time, different projects have contributed to settle the association as one of the most active actors in the cultural and local development landscape in France. Today, “Association de Mise en Valeur du Château de Coucy” holds a really good expertise in various techniques such as sculpture restoration, smithery, stone-cutting, carpentry, medieval archaeology.

The project was dedicated to stone cutting and masonry techniques and focused on the ruins of the main gate of the fortified city. This gate, called the Laon Gate, because it was on the starting point of a road leading to the city of Laon, was severely bombed during First World War. But because lots of documents, pictures and plans remained and provide a good documentation about this gate, “Association de Mise en Valeur du Château de Coucy” in accordance with the National Heritage Conservation Office started the restitution of Laon Gate. 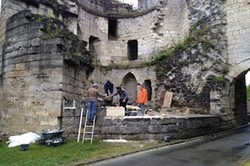