The Studenica monastery complex, located in the Raška district of central Serbia, is an outstanding and well-preserved example of a Serbian Orthodox monastery. Enclosed by an almost circular wall strengthened with two fortified gates, it features an array of exceptional monuments, including the main church at the centre and monastic facilities along the encircling wall. The monument contains remarkable treasures attesting to the magnificent artistic skills of medieval craftsmanship, and represents an outstanding example of religious architecture in the Balkan region. For this reason it has been included in the UNESCO World Heritage List in 1986.

Studenica monastery is considered to be the largest and wealthiest of Serbia’s Orthodox monasteries. It is regarded as a place where Eastern and Western architectural traditions were merged. This beautiful ensemble was built in the late 12th century near Studenica River by the Great Zhupan Stefan Nemanja, also known as Saint Simeon, who regarded as the founder of the medieval Serbian state. His remains, as well as those of his wife Anastasia and of Stephan, the first Serbian king, rest in this monastery.

Studenica monastery is not only an important monument due to its unique architecture but also for being a cradle of Serbian culture. It is there that Stefan Nemanja’s youngest son, Saint Sava Nemanjić, initiated the independent Serbian Orthodox Church in 1219 and wrote the first literary work in the Serbian language. The complex’s two principal monuments, the Church of the Virgin and the King’s Church, enshrine priceless collections of 13th- and 14th-centuries Byzantine paintings. Studenica became the most important monastery in Serbia, and has remained so to the present day. Churches and hermitages are located in the area surrounding the monastery, as well as the quarries and vestiges of a settlement for the workers who mined and shaped the marble used to build the Church of the Virgin.

The Church of the Virgin Mary in Studenica was painted under the patronage of St. Sava, the son of Stefan Nemanja in the early 13th century, by the Greek painters he brought, most probably from Thessaloniki. Well preserved fresco paintings in the Church of the Virgin Mary are remarkable examples of the painting conception of "monastic style" that was adapted and cultivated in medieval Serbia. The Crucifixion scene on the west wall of the church is one of the most beautiful compositional solutions of the Middle Ages in the world. In addition to the exceptional monastery paintings, dating from the 12th to the 16th centuries, the church is decorated with stone masonry of exceptional quality and aesthetic values.

The monastery is under continuous conservation campaign since 1995. The Crucifixion scene was restored completely in 2019.

The European Heritage Training Course will provide the opportunity for the participants to learn about Roman and medieval techniques of lime application and connected practices. This will include traditional techniques in the production and preparing of limestone, lime putty and lime plasters as well as fresco techniques.

Participants will have an opportunity to water, prepare and mix their own plasters and paint a fresco painting in a traditional way.

The Training Course will be guided by conservators-restorers with long experience in the use and development of traditional plasters. An accumulated knowledge of the professionals about the techniques will be shared, discussed and transmitted.

With its remarkable fresco painting, Studenica monastery is a perfect spot to study and research ancient and medieval lime techniques and wall painting technologies. A dense program composed of practical work and educational input activities will fill up the days with a lot of learning in the setting of this marvelous monastery.

The old St. Sava Hermitage, a steep hill beehive medieval structure, also dating from 12th century, will be visited during the weekend as part of the educational program to provide more background knowledge on the medieval history of the Balkan region and the historical uses of plaster and frescoes in the period.

The Training Course will take place from August, 29th, till September, 11th, 2021 and is organised by the Center for Cultural Heritage, in partnership with European Heritage Volunteers. 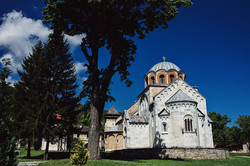 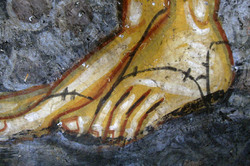 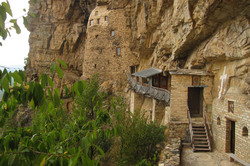