Gostuša, also known as “stone settlement”, is located in South-East Serbia in the area of the Nature Park “Stara Planina”, and it represents a unique mountain village, also listed as national cultural heritage.

The specific functional and architectural concept of the village is very interesting. It consists of the residential area placed in a narrow canyon of three small mountain rivers and satellite settlements that create a network of small independent units at a distance of 300 to 500 meters in relation to the central settlement, and all together constitute a unique living organism, changing in function together with the change of seasons.

The architecture of residential and economy units is always adapted to the terrain and the natural resources. Stone dominates as a building material, and it is used widely from the foundation to the top and the roofing.

The site is endangered by neglect and misunderstanding of its values and potentials, but also by the lack of permanent inhabitants.

The European Heritage Volunteers Partner Project was a part of the Gostuša Conservation Project that is a result of the conservation studies of village Gostuša, carried out by the Institute for Cultural Heritage Preservation Niš.

The Gostuša Conservation Project has two main operative bodies – the Local Support Centre and the Research and Education Centre that are preparing and conducting projects that enable sustainability and further development of planned actions. The Gostuša Conservation Project provides direct assistance to the most vulnerable permanent residents of Gostuša village and supports the conservation of the most endangered building structures, in accordance to a priority list. The project concentrates on one household per year and should be continued every year.

The European Heritage Volunteers Partner Project was the frist step of the Gostuša Conservation Project and gathered experts, students and local craftsmen to work together on a specific household.

The project combined several handicrafts and techniques necessary for the conservation of a historic household – masonry, carpentry and preparation and application of traditional mud mortars while using regional materials and traditional building techniques.

In addition, the project provided background knowledge about cultural landscape conservation in general, about the heritage site village Gostuša and its importance and uniqueness as well as about various aspects of vernacular architecture.

The project has been organised by Aleksandar Radovic Foundation, in partnership with European Heritage Volunteers. 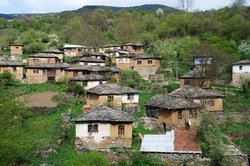 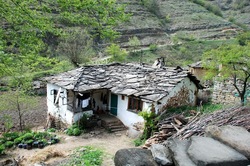