The European Heritage Volunteers Project 2018 was a continuation of a similar project that took place at the same heritage site in 2017.

The project consisted of two parts: The restoration of the historic hotel park – which is described at another place – and the documentation of the interior of the former grand hotel.

The documentation of the interior was lead by a local architect and aimed to document the most valuable rooms by drawing, photo documentation and verbal description in order to provide a serious base for later restoration, but also to allow stylistic comparison and art historical research as well as to protect the decorative elements against theft.

As result, for some rooms a detailed documenation – as so-called “Raumbuch” has been created. In addition, an inventory of mobile parts of the interior – as furniture, lamps and other elements – has been established.

The project has been organized by European Heritage Volunteers, in cooperation with Denkmalverein Freudenstadt (Freudenstadt Association for Heritage) and with support of the City of Freudenstadt and Evangelische Diakonissenanstalt Stuttgart (Evangelic Deaconess Organisation Stuttgart). 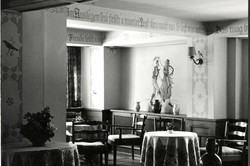