The Benedictine Abbey in Tyniec is the oldest monastery in Poland, with almost one thousand years of history. Over the ages, it went through periods of prosperity and decline, until its dissolution in 1816 and re-opening in 1939. Today, rebuilt from ruins, it is open to guests wishing to experience the living Benedictine tradition.

Its rich history and centuries-old tradition makes the Abbey, along with its museum, a unique place to encounter Polish history, culture and art. The architectural complex of the abbey combines Romanesque austerity with Gothic lightness and Baroque opulence.

However, Tyniec is not just history, but a living Benedictine community, the largest in Poland, where the daily rhythm is marked by the hours of prayers and work. By taking part in Vespers and Compline one can listen to Gregorian chant, resounding in Tyniec every day, unchanged for many years.

After the Second World War, Tyniec Abbey played an important role in the Polish Church – here the initiative of translating the Bible from the original languages to Polish found its origin; here the Polish translations of new liturgical books, introduced after the Second Vatican Council, were prepared.

For the reasons mentioned above, in 2017 the Abbey was awarded the title of a Historic Monument of the Republic of Poland. It is the highest possible distinction given to monuments in Poland, awarded to immovable heritage objects of particular importance to the culture of the country. Today the monastery in Tyniec is open for pilgrims as well as for tourists, being a place of meeting and dialogue.

The European Heritage Training Courses at Benedictine Abbey in Tyniec are good opportunities to be in close touch with cultural heritage – the participants have the chance to live and work for two weeks in a 1.000 years old monastery.

The Training Course in 2019 involved the participants in cleaning of precious Baroque wooden sculptures, altar fragments, and a painting from Saint Scholastica’s Chapel before further conservation works. The programme was designed to let the whole group be closely involved into the conservation process at all levels that are possible for non-professionals – cataloguing, photographic documentation, measuring, drawing, reconnaissance and documentation of the state of preservation, objects' cleaning from surface dirt.

This work required gentleness and precision, but the result exceeded expectations. The participants were fully aware that they were handling vulnerable and valuable objects and worked with all their heart – both very accurately and effectively. The final results of their work were no different than those that would have been obtained in a professional conservator’s workshop. Both the sculptures and the painting were prepared for further conservation. At the end of 2019, after supplementary works and aesthetic conservation, the artefacts returned to their place in the church, where they can now be admired by all the visitors of the Tyniec Abbey.

The conservation activities were preceded by the theoretical introduction on history, history of art as well as conservation and restoration techniques. The participants were able to understand the whole conservation process and not only the small part in which they were directly involved. The work was carried out under the supervision of conservators, which ensured the safety of the objects as well as enabled the participants to ask questions and consult their actions on an ongoing basis.

The Training Course has been organised by Fundacja Chronic Dobro, in partnership with European Heritage Volunteers. 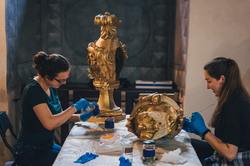 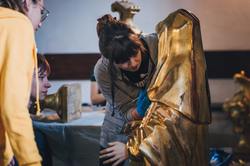 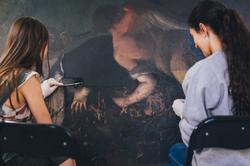