The setting for the project will be the outstanding Freiberg Mining Landscape, where Gersdorf is located. Freiberg Mining Landscape is a district contained within a wider cultural area known today as the Erzgebirge/Krušnohoří (Ore Mountains), spanning an extensive region in south-eastern Germany and north-western Czech Republic which held a wealth of several metals exploited through mining from the Middle Ages onwards. The region developed as a powerhouse for industrial mining advancement, becoming the epicentre of technological developments which had a transcendental impact in mining throughout the world. For this reason, the Erzgebirge/Krušnohoří Mining Region has been recognised by UNESCO as a World Heritage site in 2019.

The Freiberg Mining Landscape was particularly an important centre for the mining of silver. The landscape contains exceptional multi-layered evidence of silver mining activity, and related developments in an almost continuous succession from the 12th to the 20th centuries.

Gersdorf is located around twenty kilometres north-west of the mining town of Freiberg. The site has been since the 12th century home to the Segen Gottes Erbstolln mine with its integrated network of underground and surface elements. Originally the mine – which’s name derives from Heinrich von Gersdorf who, in 1547, was the first chief official of the Saxon Mining Office belonged to the nearby Cistercian monastery at Altzella. In the 17th century the mine was the largest and most important silver mine of the district, employing over 400 persons. The archaeological remains and underground structures bear outstanding testimony to the successive development of mining technology and the influence of the prevailing mining law from the 12th to the 19th century.

The Segen Gottes Erbstolln mine is representative of the type of mines found in the Freiberg Mining Landscape. The area of the mining activities on this site comprised a high plateau, which was the historical administration area. Then the mining site extends downwards via a ridge of small hills, following a steep descent from the northern flanks of the heavily wooded Gersdorf Hill, where the mining extraction took place, and into the floodplain of the Freiberger Mulde river, which was the processing and transport area. This section of the property by the river is where the adit drainage is located, as well as the water management system and the silver washing sites. The site is remarkably well preserved, and comprises an impressive silver mining landscape that contains the complete area of centuries of operations. In general, it has not suffered from modern alterations or intrusions, remaining as an authentic enclave for the study and observation of historical industrial mining heritage in Central Europe.

The overall functional integrity of the site and its components is attested by two late 18th century technological ensembles for dewatering which can be found here. One is the two parallel, flat-rod inclined pumping and hoisting systems that served the Wolfgang Schacht and the Joseph Schacht – two mining shafts built between 1791 and 1810, in use until to 1863. The structure includes their corresponding water supply ditch, wheel pits, inclined course of flat rods with two parallel masonry tunnels and twin arch entries into the Joseph Schacht. The second structure is the Water-column pumping system serving the Joseph Schacht between 1833 and 1863. It includes underground in-situ hydraulic water pressure engines, a fine masonry engine and a balance chamber adjoining the shaft, surface shat-head buildings and a water supplying leat.

The project will be focused on working in the restoration of a Mundloch to a shaft in the historical mines of Gersdorf. A Mundloch, literally translated as a “mouth hole”, is the name given to the entrance of a mine tunnel from the surface. These openings were usually built on higher ground, placed in such a way that it is above the high-water level of the valley floor so that the pit water can still flow away even during high water serving as a draining to the mine. The tunnel Mundloch served as the entrance to the tunnel operation. Depending on the purpose of the tunnel, fresh weather was fed into the tunnel or pit water was drained away via the tunnel’s Mundloch. It could also be utilised to convey to the surface the minerals extracted from the mine.

The Mundloch where the participants will be working is currently damaged, and it stands not far from two other Mundlochs which have already been reconstructed. The first task will be to prepare the site for work by removing debris from the damaged remains of the tunnel, such as threes, soil and fallen stones. As a next step, a wooden support structure will be prepared which’s upper half-rounded shape will help to rebuild the tunnel’s vault. Once the vault is completed on several metres length, the support structure will be moved and the works will continue at the next section. It is intended to rebuild up to fifteen meters of tunnel and to complete the works with the rebuilding the entrance to the Mundloch. Finally, soil will be placed above the tunnel so that – as it had been originally the case – once more be observed as an underground tunnel entrance.

The other focus of the project will be centred on the water management structures that served as arteries to the mining production of this region. The system involves a network of man-made artificial watercourses or aqueducts dug into the ground (leats). These canals are a typical of the water management systems that exist in the Erzgebirge/Krušnohoří (Ore Mountains). The edges of the ditches are predominantly supported by rubble-stone walls. The water ditches were originally covered in slabs, though most of these can no longer be seen. Several of the canals are currently dry, damaged or only contain stagnant water. The participants will be tasked to help clean and refurbish one of these canals in order to bring the structure back to a more distinguishable from, which will provide for the visitors a better visual exemplification of its uses and its importance as part of the wider network of historic waterworks in the mining region.

The project will be complemented with guided visits to sites and locations related to mining heritage to better contextualise the work and provide the participants with a complete educational experience in the historical Erzgebirge/Krušnohoří Mining Region.

The project will take place from July, 31st, to August 14th, 2021 and is organised by European Heritage Volunteers, in cooperation with the Förderverein Montanregion Erzgebirge – the Association for the Mining Region Erzgebirge and the Segen Gottes Erbstolln Mining Association and supported by the Saxon Ministry of Regional Development. 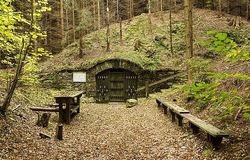 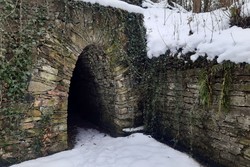 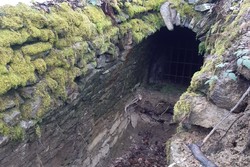