Casa Batlló, a modernist style building in Barcelona, is the result of the renovation of an austere building designed in 1877 by Emilio Sala Cortés who was Antoni Gaudí’s teacher during his architecture studies. Although the initial idea was to knock down the house, thanks to the courage shown by Gaudí, it was ultimately decided to carry out a full renovation, transforming a classic style building into a masterpiece of modernism, full of imagination and creativity from 1904 and 1906.

Natural light illuminates every corner of Casa Batlló thanks, to a large extent, to the main skylight and two central patios decorated in blue tones, where the light is distributed. The upper tiles on the patios are darker than the lower ones and the windows increase in size the lower we descend. Thanks to these two innovative ideas – the colour graduations and the size of the windows – Gaudí was successful in equally distributing light through the different floors.

Gaudí designed an original ventilation system, including different openings on the house’s windows. These openings are manual and make it possible to regulate the air with precision, without having to open the windows fully. In turn, the design of the central patios, where the majority of air enters, helps to maintain the heat in winter and ventilate in summer. Gaudí, the engineer, achieved maximum comfort following energy efficiency criteria.

Trencadís, a type of mosaic decoration, is a fundamental element in Gaudí’s work, especially on the façade of Casa Batlló. Created through pieces of broken glass and tile, it was one of the architect’s preferred techniques due to its sustainability and aesthetic value. At the house, it is one of the main decorative elements resulting in the light and colour emanating from the façade. Gaudí, a visionary, sought beauty in balance with nature.

The project is a continuation of a collaboration initiated in 2019, which was very well received by both the participants and the hosting institutions as a success. The activities in the program, the work and the setting will provide an extraordinary opportunity for the participants to immerse themselves in the world and genius of Gaudi, one of the most remarkable and unique modernist architects in the world.

The project will combine elements of documentation and research on one hand and restoration elements on the other hand.

In order to support the documentation and researchh of Casa Batlló the participants will archive and organise historical documents incorporating them in a digital database. Despite their good state of conservation, the documents are not yet incorporated into an electronic database. This task is a big priority due to the risk of loss in case of potential influences of fires, moisture and other natural phenomena. In addition, the electronic way of saving the documents enables easier to support current and future restoration projects at Casa Batlló.

The project is organised by Casa Batlló, in partnership with European Heritage Volunteers. 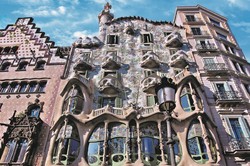 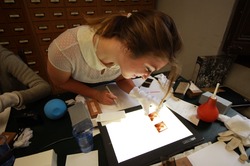