The European Heritage Volunteers Project “Parks and Gardens of Classical Weimar” has been taking place since 2011. The project aimed to combine practical work to restore and maintain the cultural landscape with heritage education and the promotion of the idea of volunteering for heritage.

From 2012 to 2018 the main focus of the project was the restoration of a system of historic paths in the South-Western part of Belvedere Park, around the “Large Grotto”. Based on plans from the early 19th century the participants were carefully searching for remains of the original paths which disappeared several decades ago, and uncovered and restored their tracks. So, year by year another section of the paths had been rebuilt, and the works in this part of Belvedere Park have been finished during the 2018 project.

The project was a good example for the potential of heritage volunteering projects: The restoration of historic path system needs a very careful approach, and the works can be undertaken only manually since machines would damage the original situation. Thus, if the restoration would have been carried out by paid workers they would not have been affordable, than less that the personal situation of Weimar Classic Foundation, the responsible site management, is already too limited to carry out the every-day maintenance works in the large garden and park areas.

In addition, the fact that the works had been carried out year by year by volunteers, brought – in combination with intensive press, radio and TV activities – a public interest for the formerly underappreciated part of the of Belvedere Park which would not have been raised in the same way if the works would have been undertaken by firms.

Finally, the project shows that volunteers’ work can – if it is well planned, structured and guided – achieve remarkable results both concerning quality and quantity.

The project has been organised by European Heritage Volunteers, in cooperation with Klassik Stiftung Weimar (Weimar Classic Foundation).

Furthermore, the 2018 project was part of European Heritage Volunteers’ overall project “Best practice models of volunteering for European Cultural Heritage” that had been selected by the German National Committee for Heritage Protection, the responsible body for the “European Year of Cultural Heritage” in Germany, as one of only few “projects of all-state relevance”. 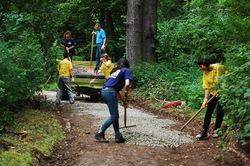 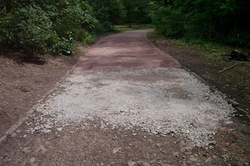 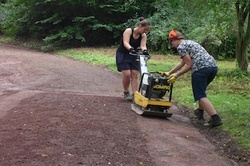