The village Pidkamin – translatable into English as "below the rock stone" – takes its name from a mountain called the "Devil's Rock", which is located on an adjacent hill. The land in the village and around it is full of piety. The rock stone served in pre-Christian times as a kind of talisman to protect people from evil. With the adoption of Christianity, the temple-fortress was located in this place. Opposite the rock on a hill a Dominican monastery was located which made Pidkamin known.

Legend says that it once sheltered twelve monks fleeing Kyiv in 1234 when it was ravaged by Mongols. They built a chapel and set up a cross but did not survive long. The Mongol invasion reached their village, the shrine was destroyed and the monks were killed.

The first mention of a wooden Catholic monastery of the Dominican Order refers to 1464, but in 1519 the monastery was destroyed together with the city during the attacks of Tatars. The monastery acquired the current look in the 17th and 18th centuries.

The heyday of the monastery began in the 18th century. By that time, there were more than 150 monks in Pidkamin. The collegiate icon of Panagia (Our Lady of the Snows) has long been considered miraculous, and in 1725 Pope Benedict XIII. sent for her a golden crown. The coronation took place two years later; nowadays the crown is located in Wroclaw, Poland.

The decline of the monastery started in 1772, when the land passed into the possession of the Austria-Hungarian state and a mass closure of monasteries began.

The Ascension Church with a tall tower with Baroque spire dominates over the monastery complex. The complex is surrounded by walls with towers and bastions. In the center of the courtyard a Corinthian column with a figure of the Virgin from 1719 is located.

The Ascension Church was decorated for years with sculptures and frescoes. Among the sculptures are works of the sculptors Zarnovica, Rostang, Kulchitsky, Lindskog, Stroinski, Saganowski and Politynski. The murals were created for several construction periods – most of them around 1766, others in later periods.

The frescoes and other works of art were damaged during World War I. The interior restoration was carried out in the interwar period. In 1944, the monastery was closed by the Soviet authorities. In 1997, sacred buildings and some of the cells were transferred to the monks of the Order of the Ukrainian Greek Catholic Church named "The Origin of Wood Cross of the Lord".

The project focused on the Roman Catholic Dominican monastery "Dormition of the Mother of God, Cross of the Lord, Saints Peter and Paul and all Saints" in Pidkamin.

Because of the endangered state of the wall paintings there is a need for detailed studies in order to prepare their further preservation. In particular, detailed studies of the history of the monument, of the preserved murals and of the techniques that had been used are necessary as well as the retrieval of graphic data for the later redrawing of the paintings.

In addition, there had been carried out other works aiming to the preservation and conservation of the monastery complex as removing soil form the historic well, renovation and readjustment of cultural and historical objects on the territory of the monastery as well as different other interior and exterior manual works.

In the frame of the study part an open discussion about preservation of the wall paintings in the main temple of the monastery in Pidkamin had been held. Furthermore, excursions through the town Pidkamin and to castles and monasteries in the surrounding region had been organised.

The project had been organised by Union Forum Lviv and the Order "The Origin of Wood Cross of the Lord" of the Ukrainian Greek Catholic Church, in partnership with European Heritage Volunteers. 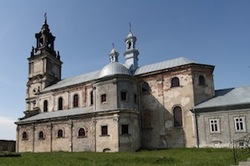 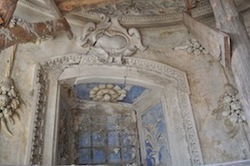 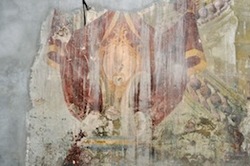 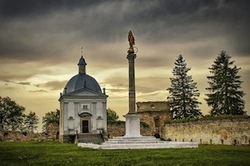