Transylvania is famous for it’s over 160 fortified churches and their long history dating back to medieval times. There are seven fortified churches with their corresponding villages which are inscribed as UNESCO World Heritage sites since 1993, being representative exemplars of this exclusive culture which developed in this region. These peculiar village kind were founded by the Transylvanian Saxons and are characterised by a specific land-use system, settlement pattern and organisation of the family farmstead that have been preserved since the late Middle Ages. They are dominated by their fortified churches, which illustrate building styles from the 13th to the 16th century. Nonetheless they are now under threat due to significant loss of population and abandonment.

At the time when these fortified churches emerged, Transylvania was a hard-fought border region. The population reacted to enemy attacks by expanding their churches through fortifications. In cases of conflict the fortified churches served the villagers as an area for retreat and protection. For centuries they have been modified and reconstructed. Many of them have been maintained to these days and together they form the unique landscape of fortified churches which is characterised through the density and diversity of this cultural heritage. They are the visible landmarks of many villages and the entire region.

The fortified churches were mainly constructed, used and maintained by the German-speaking settlers – the Transylvanian Saxons. For centuries they were the centre of religious and cultural life within the communities. After more than 800 years most of the Transylvanian Saxons emigrated and left the fortifications behind. Therefore the future of the fortified churches remains uncertain. Currently more than half of them are threatened to deteriorate to different degrees.

For this reason, the Fortified Churches Foundation was established and serves as an expert institution for the preservation and maintenance of this unique religious and cultural heritage. The Romanian President Klaus Werner Iohannis and the President of the Federal Republic of Germany Frank-Walter Steinmeier have taken over the double patronage of the foundation.

The main objective of the foundation is to preserve, protect, and care for the structure in its authenticity and its historically evolved state including the historic traces and changes.

All of the maintenance and reparation works carried out follow along the strict guidelines of heritage conservation and traditional craftsmanship. A lot of respect goes to the architectural accomplishments, the high quality, and the artistic creation of the original builders.

To do so, the Fortified Churches Foundation has established a lot of tools appropriate to raise awareness about this unique European cultural heritage within the country as well as abroad, to contribute to the rescue and the conservation of endangered churches, to revitalise them and to educate local and regional activists in these fields. In this regard, since 2018 yearly “hands-on conservation workshops” are organised.

The this year’s project is the first activity within this collaboration programme and will match the Fortified Churches Foundation’s “hands-on conservation workshops” format with European Heritage Volunteers’ traditions and experience in the field of volunteering for cultural heritage.

The project will take place in a fortified church complex which is highly exemplary both for the fortified churches as well as for the surrounding village structures – concerning their substance, endangeredness and potentials. The ensemble stands amidst the picturesque valley of Hârtibaciu River in the village of Hosman. The fortified church is located in the center of the settlement, and it is one of the most photographed in all Transylvania. In clear weather the church has as background the spectacular view of the often snow-caped South Carpathian Mountains.

Today Hosman is home to a number of initiatives with focus on the preservation and cultivation of tangible and intangible heritage as a way of life. The church itself is under the responsibility of the Evangelical Church of Augustan Confession in Romania, the former parish house and other components of the ensemble are managed by the Association European Youth Center Hosman. The association is taking care of the parish house and of parts of the fortification, runs the house as an educational centre and organises educational and intercultural events in order to keep breathing life into the ensemble of the fortified church and the village as a whole.

In regard to the first, smaller architectural elements – a wooden staircase, a small shelter and others – will be carefully restored, conserving as much as possible original substance. As the main task a one-to-one-copy of the traditionally designed entrance gate to the parish ground will be built since the original gate is too rotten in order to be restored.

The stone-related works will concentrate on the fortification system – the walls themselves and a historic building which is directly connected with the walls. This building which has been used over decades as a stable – despite it might have had originally another function – forms elementary part of the picturesque view of the whole ensemble and is endangered in its stability. Here, the foundation has to be repaired and missing parts of the walls added. At the fortification walls smaller repairs have to be undertaken and gaps between the stones cleaned and systematically filled with mortar.

Depending on the workflow at the abovementioned building – which cannot be fully predicted since it will by influenced also by technologically given challenges which might come up only during the conservation process – it is planned to conclude the project by a joint activity of both groups to repair parts of the roof construction and reroof the building.

During the project the participants will have the opportunity to rotate between the groups and thus to carry out different tasks and to become familiar both with traditional wood and traditional stone techniques.

The project will take place from September, 12th, till September, 25th, 2021 and is jointly organised by the Fortified Churches Foundation, European Heritage Volunteers and the Association European Youth Center Hosman, in partnership with the Evangelical Church of Augustan Confession in Romania. 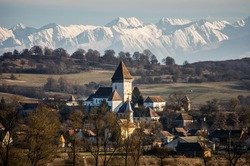 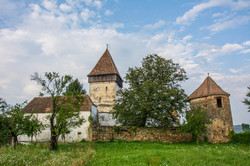 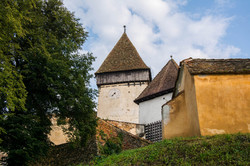 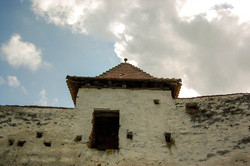 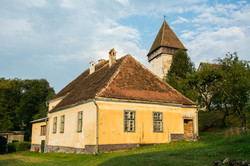 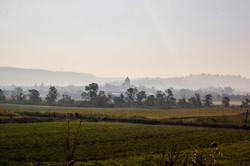