Soon after their arrival in the “land beyond the forest”, Transylvania, in the 12th century, the first Saxon settlers built in the village a wooden church at the same place where we can today find the fortified church. Due to the rugged characteristics of the surrounding region, the town was named Hundertbücheln, an expression which in German is related to “hundred hills”; the village’s Romanian name is Movile and the Hungarian one Százhalom. Due to repeated attacks by the Ottomans as well as by armies of other warmongers in the following centuries, it soon became necessary to rebuild the largest building in the village from stones and to reinforce it with two mighty towers: the bell tower on the west side and the massive Pelsenturm on the east.

During these attacks, the villagers fled to their fortified church ensemble and defended themselves together against the enemies. In the course of time the village grew, and so did the fortified church. More and more stones had been carried from far away to the center of the village, and each generation added some features to their life’s centre point. Around the year 1500, a high defense wall was built around the central buildings and three more towers raised the defense capacity against the foreign warlords. At the end of the Middle Ages, the climax of defense architecture in Transylvania, another second protective wall with one or two little towers at the edges was built in a semicircle around the western side in order to be able to offer a shelter for the village’s cattle and to store the easily combustible forage safely. It is not known exactly how many times the villagers of Hundertbücheln had to flee into their fortified church to defend their lives and the ones of their neighbors shoulder to shoulder, but obviously their knowledge and skills of building were extraordinary.

Today most of the architectural features of this impressive fortified church remain. The only significant change is that – since the devastating attacks after the fall of the Ottoman Empire no longer took place – the outer wall was largely removed in the beginning of the 20th century in order to use the stones to build the new, spacious Parish House, which is today available as the village’s guest house. Moreover, the little prison tower(s) disappeared, and one of the larger towers collapsed and can be found as an atmospheric ruin at the south-east side of the ensemble.

After the great exodus of most Saxon people to Western Europe in the years 1990/91, the fortified church of Movile – like most of Transylvania’s architectural heritage – seemed to have lost their important caretakers. But in 2015, a group of friends from all over Europe founded the “Churchfortress Association” and started to maintain this impressive cultural heritage. In cooperation with emigrated Transylvanian Saxons and the Foundation for Fortified Churches in Transylvania, the association plans and implements measures to preserve the fortified church, its ensemble and the village Movile with the surrounding cultural landscape. On one hand the association aims to preserve the ensemble as a protected heritage site, on the other hand to develop opportunities for its subsequent use and therefore to provide creative space adequate to modern times.

Despite climate change, the winters still bring heavy snowfalls and severe frosts to the Transylvanian hills and have been enchanting the fairytale landscapes at the foot of the mighty Carpathians every year since the historical settlement of the Transylvanian Saxons. Frost blasts and the heavy snow loads on the one hand, but also the strong roots of some woody plants on the other, set even the largest stones in motion. As soon as the first stones have slipped out of the powerful compound, the wall begins to crumble. This has already caused the appearance of two major gaps on the approximately five-hundred-year-old ring wall around the fortified church. With each winter, the gaps are slowly but surely getting bigger and more pronounced.

Under the guidance of a regional craftsman, the project intends to stop the decline of the wall and will allow in the same time to dive into the secrets of traditional Transylvanian masonry techniques. In the first step, all loose stones will have to be removed until only those firmly seated in the compound will remain; soil and roots must also be removed. Then the difficult puzzle begins aiming to put the stones back together in line to form a strong bond. Finally, drainage made of geo-textile and gravel will be laid on the backside of the wall in order to increase its stability and longevity and to successfully protect the structure during the upcoming winters.

The old gate tower of the fortified church ensemble collapsed in the first half of the 20th century. Since the fortified church no longer had to fend off any enemies at that time, the hard work of rebuilding such a big tower was saved. What remained is a romantic tower ruin in the central part of the fortification ensemble between the church and the orchard in the shade of a huge walnut tree – atmospheric, but without any function.

Under the guidance of another craftsman from the region, first the site will be cleared from centuries-old rubble and the remaining foundation walls of the tower will be secured in their current state. Then a rustic wooden stage will be built into the tower ruin. By doing so on one hand the special atmosphere of the place shall be preserved, and on the other hand the site shall provide opportunities for cultural uses as village concerts, performances and other events in the immediate vicinity of the medieval church in order to bring life back into the ensemble and to add a contemporary element to the heritage site.

The project will take place from August, 29th, till September, 11th, 2021, and is jointly organised by the Fortified Churches Foundation, European Heritage Volunteers and the Churchfortress Association, in partnership with the Evangelical Church of Augustan Confession in Romania. 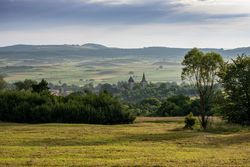 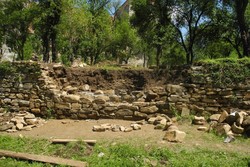 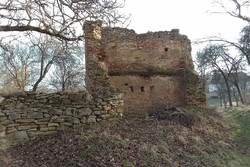