The village of Dresnik is located in the central part of the Republic of Kosovo, two kilometres south of the town of Klina.

The first archaeological excavations in the area were initiated by the Archaeological Institute of Kosovo in 2012. These excavations which are still ongoing have helped to clarify the character of the site, in the administrative, architectural, and urban aspects as a relevant site of the Roman era.

The archaeological site of Dresnik is an excellent example of Roman construction remains since it contains distinctive structures of Roman architecture and styles from different periods on a single location. The site illustrates two different phases of development which convey a historical significance.

The first phase is called the pre-imperial phase and consists of the remains of a villa with a surrounding vicus. This kind of the site is relevant for the study or Roman provincial archaeology of the period. This first phase dates to the 2nd till 3rd century A.C., and it contains the remains of the structures later destroyed for the construction of an imperial residence. For this reason, the architectonic development of this period can be observed only in a fragmented form. So far, only two structures of this period are distinguishable. One is thought to have been a Villa Rustica, and the other one a Roman bath.

The Villa Rustica is located under Palace II and so far, only three rooms of this structure have been excavated. The walls were constructed using the opus incertum technique, with a thickness of about half a metre and the surface of the wall in one of the rooms painted with frescoes. These frescoes attest of luxurious spaces; however, the remaining fragments are very scarce. The two remaining rooms are covered in lime mortar flooring. Characteristic of this structure are the buttresses on the western wall.

North of the Villa Rustica the Roman Bath is located from which only the caldarium is explored. The caldarium floor, according to the archaeological finds, was decorated with mosaic floors found now only on the room’s threshold, while the rest of the mosaic has been probably destroyed when the floor which was suspended above the hypocaust floor collapsed.

The second phase of the Dresnik site corresponds with an expansion in the monumental characteristics of the structure that occupied the excavated site in the later period. The structure is a larger estate known as the Imperial Residence.

At the end of the 3rd century the site saw an increased intensity of new constructions, which changed the character of the settlement. At this stage, a massive fortification wall was built, which enclosed the residential complex with two buildings and accompanying structures. It has already been confirmed that these types of settlements were the residences of Roman emperors during the 3rd and 4th centuries. The most well-known are the imperial residences in Gamzigrad – Felix Romuliana (today Serbia), Stobi (today Northern Macedonia), and Split (today Croatia).

The European Heritage Training Course presented an opportunity for the participants to learn and take part in the preventive conservation efforts on the archaeological site of Dresnik. The goal of the course was to carry out a proper technical documentation and photo documentation of the vestiges, while performing an intervention to protect the Roman mosaics in the structure known as Palatium 1, as well as other activities related to the archaeological work in the dig.

The last time there was an intervention done on the mosaics in this structure was six years prior to the project. The mosaics at that time had been covered by a plastic mesh for protection and laid under at least ten centimetres of sand and outgrown vegetation. The first task for the participants was to uncover the mosaic surface starting with removal of the sand with shovels. When it became clear that some of the plants’ roots were beneath the mosaic surface and grew up through the mesh and sand, the mesh had to be carefully removed while taking out those plants and roots using scalpels and scissors rather than plucking them. After that process was finished, the mosaic surface was cleaned with soft brushes to reveal the current condition of the mosaics after having been covered for such a long period. The surfaces were then washed with small amounts of water and soft sponges to bring about the original colours and design.

The initial uncovering revealed a wonderful pattern of geometric figures covering some 55% of the room in seven different colours – white, black, light gray, dark gray, ochre, pink and red – created using small blocks known as tesserae, with an average size of 1,5 cm² each. Some of these tesserae had become lose during the cleaning process, and others had succumbed to the damage done by the growth of vegetation and time. The process also revealed that previous interventions and the quality of the mortar used in those occasions had also contributed to the current damage of the mosaic. The participants, guided by restorer-conservator specialised in mosaics, made  a descriptive photo documentation and a technical documentation of the condition of the mosaic, where all damages were described and marked on.

The remnants of the mortar used in the previous interventions had to be removed carefully from the tesserae before new material could be applied and the base of the mosaic could be secured. The following step was the process of applying new mortar on the edges and retouching in the areas where there were detached tesserae. Almost all mosaics on the Balkans from the roman period (4th and 5th century) are usually bind together in a mortar following a similar recipe utilised in this occasion by the professional guiding the training course.

The mortar was applied on a clean and wet surface using small spatulas. The detached tesserae were placed back in a fresh mortar according to the previous drawing or photograph of the original mosaic decoration. All the loosened tesserae were removed, the area was cleaned and consolidated and then they were placed back in fresh wet mortar on the same level as the rest of the original mosaic surface. After applying the mortar the area was cleaned with water to prevent the lime from the mortar to penetrate in the stone porous structure and cause further damages. At the end, the mosaic was covered with new canvas to prevent the water from to penetrate into the mosaic but allowing humidity from the ground to evaporate. On top of this canvas new sand was placed for more protection.

Additional the participants were involved in archaeological works guided by local experts on the site section known as XLVII, which is a 3rd century addition discovered by geophysical surveys in 2015. The excavation has been ongoing since 2019, revealing a luxury structure with floor mosaics and wall paintings. The training course contributed in unveiling the continuation of a wall and the confirmation of the existence of wall paintings with a number of fresco fragments and other features. The participants had the opportunity to take part in a real excavation, to learn introductory archaeological techniques and concepts, the basics of stratigraphy and practical knowledge on site layout, documentation and measurement taking.

Within the framework of educational part of the training course the participants also had the opportunity to visit the region and get a widening knowledge of the intricate history of this territory as well as its natural heritage. They took part in several excursions guided by local experts, which included a visit to the Patriarchate of Peć Monastery – part of the World Heritage site “Medieval Monuments in Kosovo”, villages with examples of traditional architecture, a historic Ottoman Mosque, a visit to Prizren castle, a guided tour of Ulpiana Archaeological site, to Gračanica Monastery and the Drini River waterfall. Overall, the participants had an exciting submersion into Kosovo’s history and landscape, and an enriching educational experience with new skills learned.

The Training Course has been jointly organised by European Heritage Volunteers, the Kosovo Council for Cultural Heritage and the Archaeological Institute of Kosovo, with support of the Ministry of Culture of the Republic of Kosovo and the Municipality of Klina. 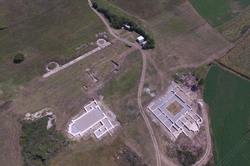 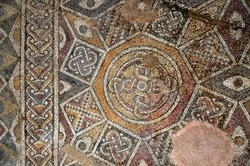 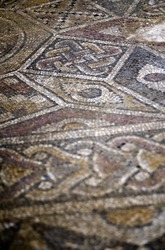 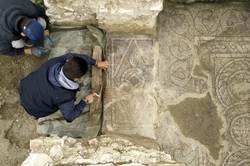