Zittau is a small town with a beautiful historic centre, located in the easternmost part of Germany, in what is now the German-Polish-Czech border. Historically speaking, these borders are all relatively young, as they were established only after the Second World War, and the states bordering each other have only existed in their current form since 1990 (Federal Republic of Germany and Poland) resp. 1993 (Czech Republic). In the collective memory, the recentness of the current situation is still quite present, f.e. through family biographies marked by expulsion, forced displacement and exile.

The European Heritage Volunteers Project will be dealing with a special aspect of these historical shifts and ruptures: the history of the Jewish people in the region. While records of Jewish life go back to the Middle Ages, it was not until the 19th century that Jewish culture and the activities of Jewish people started to leave a bigger mark on the cultural landscape of the Zittau region.

Because Jews were granted civil rights in Zittau as late as 1871, such as the right to buy real estate or the right to permanent settlement, it was only in 1885 that a Jewish community was founded. The Jewish cemetery was inaugurated in 1887, with the mayor and other town representatives present. This hints at the rapid integration of Jewish people into the Zittau society. In the following decades, the Jewish population grew from about 60 to almost 200 people.

However, antisemitism was always a threat, with major outbursts already in the 1890s and its violent culmination in the extermination policy under the Nazis after 1933. More and more Jewish families left the city, seeking refuge in bigger cities or fleeing the country. Of those who stayed, only very few survived the Holocaust. Thus, only a handful of burials took place at the Zittau Jewish cemetery after 1933. The neoclassical mourning hall that had been built on the cemetery only thirty years earlier was demolished in the November pogroms of 1938.

After the end of the Second World War, there was a short period of active remembrance, followed by decades of neglect and deliberate destruction of the Jewish cultural heritage. Although the German Democratic Republic defined itself as a counter-state to the former “Third Reich”, antisemitism was still very present among the population and in politics. Even after 1990, the Jewish cemetery was repeatedly desecrated, the last act of vandalism being recorded in 2003. This event represented a wake-up call to the active citizens of Zittau, showing that something had to be done to protect the cemetery and prevent antisemitic attacks in the future.

Since then, Hillersche Villa, which is a socio-cultural centre founded in the early 1990s, together with volunteers and the municipality, has been working on the documentation and restoration of the Jewish cemetery. Their aim is to enhance its visibility and to raise awareness of Zittau’s Jewish history through guided tours and educational programs. In 2013 and 2016, they organised two archaeological excavations on the Jewish cemetery, with researchers and volunteers working together. These brought to light the foundations and pieces of decoration of the destroyed mourning hall. All these activities are coordinated with the Jewish community of Dresden, who is the owner of the cemetery since there is no Jewish community in Zittau anymore.

The project will focus on new forms of exploring and mediating the Jewish cemetery of Zittau as one of the last authentic sites of Jewish cultural heritage in the region. Using digital tools and methods of heritage interpretation, the participants will collaboratively create a virtual tour of the cemetery, providing information about the people, places, personal stories and historical events connected to it. The content of the virtual tour will afterwards be used by local educators to engage more and different people in the topic.

Heritage interpretation is a methodology that was originally developed to more strongly engage visitors of national parks in the U.S.A. in the 1950s. Interpretation does four things: it provokes visitors' curiosity and interest in what may be an unfamiliar topic or theme; it relates a historic, cultural, or natural site to visitors' own knowledge, experience, background, and values; it reveals the significance of the site; and it helps people enjoy an educational experience. Heritage interpretation is a set of methods used by many museums, historic sites, nature reserves, and other sites around the globe.

In this project, methods of heritage interpretation shall be used to understand and interpret the Jewish cemetery in Zittau. The aim is to develop the historic site into a space where Jewish life, death, and heritage in the region can be comprehended in a relatable way, on-site as well as online. After an introduction to the relevant historical sources and materials, the participants will get basic training of working with heritage interpretation, interpretive planning, and interpretive media. They will work in small teams, each focusing on one specific aspect of the heritage site.

The work will be accompanied by a cultural and educational program. The participants will visit other Jewish heritage sites in Görlitz in Germany, Liberec in Czech Republic and Sieniawka in Poland. They will learn about the cultural specifics of the border region of Germany, Poland, and Czech Republic. The participants would also have the opportunity to interact with locals, talk to them about their work and ask questions. There will also be an exchange with young members of the Jewish community Dresden on Jewish life in Germany today.

The project will take place from July, 18th, till July, 31st, 2021, and is jointly organised by Hillersche Villa and European Heritage Volunteers. 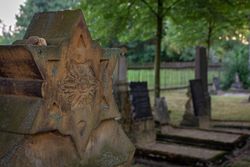 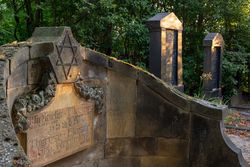 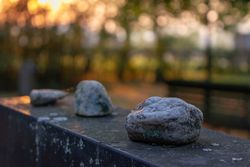