"Classical Weimar” was added to the list of UNESCO World Heritage sites in 1998, the 20th site in Germany to be recognised as World Heritage. “Classical Weimar” comprises twelve individual buildings and ensembles, all of which portray tangible and intangible elements of Classical Weimar’s cultural heritage. Weimar’s City Castle, the Duchess Anna Amalia Library, Goethe’s and Schiller’s residences, the Town Church, the Ducal Vault with the Historic Cemetery and many others are included on the World Heritage List.

The European Heritage Volunteers Project “Parks and Gardens of Classical Weimar” has been taking place since 2011. The project aims to combine practical interventions to reconstruct and maintain the historic gardens and parks with heritage education and the promotion of the idea of volunteering for heritage.

The reconstruction part will take place at the so called "kitchen garden", situated at the southern edge of Belvedere Park. The kitchen garden had been arranged in the 19th century as a combined fruit, vegetable and flower garden. Time has had its hand on this garden, and some of its elements have been lost to nature’s way. Nonetheless, the traces of the original designs remain. As in the previous years, the project will combine two tasks – the conservation of the dry stone walls surrounding the garden and the reconstruction of its former path system.

The dry stone walls as the formative element of the kitchen garden are ruinous and need to be protected against progressive decay. During the previous years the structure has being successively repaired. Within the framework of the 2018 project the first steps have been undertaken, which were advanced in 2019 and 2020; in 2021 the works will be continued. Plants that damage the walls will be carefully taken away, the instable parts of the walls stone by stone deconstructed and later replaced. Since the dry stone walls are an important habitat for wild bees and other rare insects the interventions need to be carried out extremely carefully. The works will be guided by a bricklayer specialised on dry stone walls and traditional masonry techniques, who will provide during the study part additional theoretical knowledge in this field.

Another part of the group will continue to reconstruct a stone stairway connecting the kitchen garden with the other parts of Belvedere Park as well as to uncover and reconstruct the pathway which had been leading to the central area of the kitchen garden, where a small fountain used to be located according to historical records. Eventually, the pathway will be uncovered all the way until the dry stone wall to complete the narrative of this area of the site.

The participants will have the opportunity to rotate between both groups and thus to become familiar both with the dry stone wall techniques as well as with the tasks related to garden archaeology and the reconstruction of the path system.

The educational part of the project will inform the participants about the background of the project, while providing knowledge about historical gardens and parks, traditional gardening and other related topics. Guided tours will also be included, presenting the participants with an overview of the “Classical Weimar” as a UNESCO World Heritage site, as well as excursions to related heritage sites. The opportunity of free entrance to museums and exhibitions will also enable in addition individual study.

The project will take place between August, 28th, and September, 11th, 2021 and is organised by European Heritage Volunteers, in cooperation with Klassik Stiftung Weimar – Weimar Classic Foundation.

As in all years since 2012, the project is part of the World Heritage Volunteers Campaign, a worldwide initiative put forth by UNESCO, being its longest recurrent project to take place uninterruptedly. 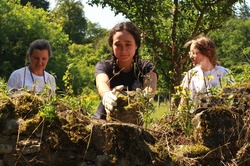 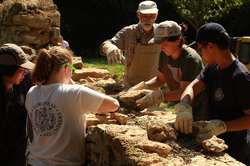 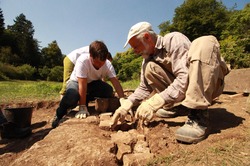 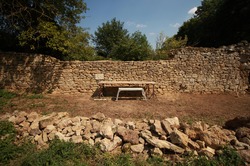