The cultural landscape Upper Middle Rhine Valley, Rhineland-Palatinate, Germany, is an outstanding organic cultural landscape which includes a rich diversity of both cultural and environmental aspects. The 65 kilometres long stretch of the Upper Middle Rhine Valley, with its castles, historic towns and vineyards, graphically illustrates the long history of human involvement with a dramatic and varied natural landscape. It is intimately associated with history and legend and for centuries has exercised a powerful influence on writers, artists and composers.

In 2014, during archaeological excavations carried out on the plateau in-between the Romanesque Palace and the Small Battery, the foundation walls of a Romanesque chapel that had been turned down in 1588, were uncovered. After the excavations had been completed, the findings were again backfilled in order to preserve them. The former chapel is of big historical significance for Marksburg Castle since it is possible that the castle's name, "Marksburg" – meaning “St. Mark's Castle" – had been derived from the chapel's patron St. Mark. In order to make the former chapel more comprehensible for visitors and to include it in the tours through the castle, the projects aimed to mark the outline of the former chapel in the ground with flagstones.

In addition, the volunteers worked in the area of the Outer Bailey, the so-called "Goats' Bailey", which is – together with the there located bastion – supposed to be opened for visitors of the castle. Therefore the area was cleared of undergrowth such as thistles, blackberry bushes and ivy, which have grown rampant along the escarpment. In doing so, this part of the castle became more accessible and comprehensible in its historical dimensions and its function as a defensive zone.

Within the framework of the educational part the participants gained background knowledge about Marksburg Castle itself, but also about the different uses of fortresses from the middle age till nowadays as well as about the potentials and challenges of the conservation, the restoration and the management of historical complexes in general.

The project has been organised by European Heritage Volunteers in cooperation with Deutsche Burgenvereinigung (German Fortresses' Association). 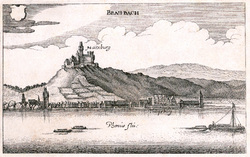 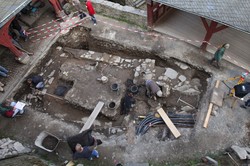 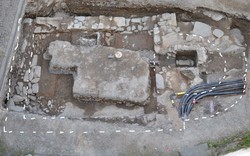