The Stone Age Park “Steinzeitpark Dithmarschen” is an educational structure placed at an archaeological-environmental area of a size of 40 hectares that includes original archaeological heritage sites, environmental open spaces of high diversity and a “Stone Age Village” in the form of an Open Air Museum.

Main aim of the institution is to communicate reflected knowledge about the prehistoric relationship between human beings and environment and to wake understanding for other cultures in time and space.

The “Steinzeitpark Dithmarschen” which had been founded in 1997 aims to create in the long run a cultural landscape from the New Stone Age era 5,000 years ago and to communicate the complex connections of landscape development in the Stone Age as well as the results of the prehistoric research towards a wider public.

By using a mostly natural – although landscape architectural steered – development process lasting several decades former corn fields will be converted into an area that provides concerning structure, proportions, feeling for free space, chromaticity and usability the impression of a landscape of the New Stone Age. In the same time the area with its nine well preserved archaeological sites – large graves, grave hills and “colossus beds” – will offer an attractive space for educational and recreation purposes.

Basing on new results of archaeological excavations and using handcraft techniques that had been used during Stone Age era a “Stone Age Village” had been constructed that offers to the visitors various activities illustrating the life in the Stone Age as doing archery, preparing flint stones, sparking fire, baking bread in traditional way and others.

The development concept for the open space areas orientates at the prehistoric landscape created by the first rural settlers in the region near the Western coast of the current Northern Germany while using cattle. To re-establish this traditional form of landscape management by extensive pasturing “Steinzeitpark Dithmarschen” started to settle traditional cattle races.

The concept of “Steinzeitpark Dithmarschen” is completed by an exhibition area hosting a permanent exhibition about New Stone Age and various changing exhibitions and a regular calendar of presentations, lectures and courses in prehistoric handcraft techniques.

The European Heritage Volunteers Project contributed to the ongoing construction of the Open Air Museum, carried out maintenance measures in the open space areas and supported the concept of mediation of the Stone Age period to visitors. The works were carried out in two groups, and the volunteers had the opportunity to alternate during the duration of the project between the particular groups.

Basing on results of archaeological excavations in Northern Germany one group constructed a wooden path through a moor while using techniques that had been used in New Stone Age period.

Another group maintained the archaeological heritage sites in the Stone Age Park while planting hedges and constructing hurdle fences to create a natural “protection zone” around the graves, reconstructing a model of a “construction site” from the Megalith era, repairing paths, cutting grass and similar.

Finally, the volunteers translated the content of information desks in the Open Air Museum into English resp. from English to their mother tongues to make the site more accessible for foreign visitors.

The educational programme consisted of a detailed introduction during the first days, an excursion after the first week and the opportunity to participate at all activities during the “Stone Age Week” that took place parallel to the second week of the European Heritage Volunteers Project at the Open Air Museum. The “Stone Age Week” under the title “Life in the Stone Age – second European gathering after 5,000 years” gathered around 80 participants from all over Europe as well as from other continents that are active as researchers about Stone Age resp. in the field of museum pedagogic and non-formal education linked to prehistoric era. The participants of the “Stone Age Week” imitated during those days the life in Stone Age to gain realistic inside view and first hand experiences about this era and offered in addition public lectures and presentations about life in Stone Age. 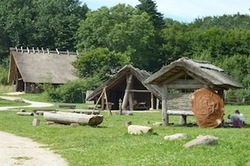 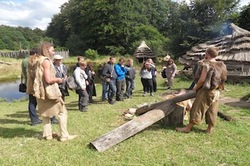 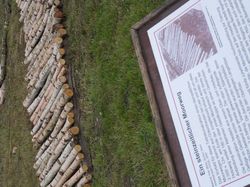