Loyev is a small town, situated in Gomel region of the Republic of Belarus. The first people settled in these territories 8.000 – 7.000 years ago. Officially Loyev was first mentioned in the historical chronicles in the 15th century, but the archaeological excavations and the findings of the researchers prove that the settlement existed there much earlier. Loyev and the neighboring village Mochow were used as the camps for the traders on their trade route from the Varangians to the Greeks in the 10 and 11th centuries, thus contributing to the development of the eastern Slavic territories.

By the 16th century the place was an administrative centre for the region with a well-protected medieval castle. Since those times the history of the town is closely connected with all the major wars that touched Belarusian lands. In the early 15th century the place was burnt by the Crimean Tatar horde. The constant attacks of the enemies made the Grand Dukes of Lithuania – who ruled over the territories of the modern Belarus, Latvia and Lithuania and parts of Russia, Poland, Estonia and Ukraine – dedicate special attention to developing and strengthening the system of the close-to-the-border castles. Understanding the importance of the settlement on the Dnieper River Loyev was rebuilt and even given the “Magdeburg Right” – the right for the full autonomy – in 1576. Together with other well-developed towns like Nesvizh, Mogilev and Lida the town was named the free trade zone.

The town continued playing important role in the 17th and 18th centuries until it was included into the Russian Empire in 1793 after the Second Partition of the Polish-Lithuanian Commonwealth. Loyev wasn’t the border point any more which led to its desolation.

At the moment Loyev is a small administrative centre with about 7.000 people. Nevertheless, the hill where the castle used to be is still the symbol of the ancient and exciting history of the town. The events and historical processes, connected with it, without any doubts, influenced the course of the cultural development of southern Belarusian lands and it’s extremely important not to lose this part of Belarusian heritage.

The international archaeological volunteering project “Archaeology in Loyev” gathered eight young people from different countries who learned under the professional guidance of the staff research officer of the National Academy of Sciences the basics of archaeological excavations, including the skills of organizing the excavation site.

The project included a special educational part giving the chance to the participants to learn about how to clean, to catalogue, to measure and to value the found objects.

Furthermore, workshops and excursions were aiming to spread among the participants the knowledge about the history of the town Loyev, of the regional centre Gomel and of the southern parts of Belarus as well as to raise their awareness on the importance of the preservation of Belarusian national heritage.

The project has been organized by the League of Youth Voluntary Service of Belarus and the Institute of History of the National Academy of Sciences of the Republic of Belarus, in partnership with European Heritage Volunteers. 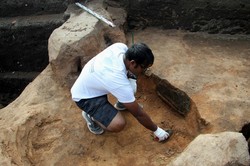