The works will be lead by a master of carpentry who has additional education as “Restorer in Handicraft”.

Within the framework of the educational part other historic roof constructions in the village and the region – in the manor house itself, the village church and in the town nearby – will be studied and discussed.

The project will take place from July, 07th, to July, 21st, 2019 and will be organized by European Heritage Volunteers. 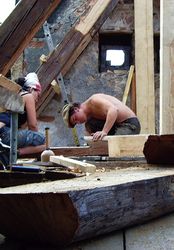