The UNESCO World Heritage site Historic Centre of Oporto is the heart of one of the most emblematic cities of Portugal located along the hills overlooking the mouth of the Douro River in northern Portugal. Inscribed in the UNESCO World Heritage list in 1998, this magnificent location offers a unique opportunity to observe the dramatic evolution of an urban landscape throughout 2,000 years of history. This UNESCO property also includes Luíz I Bridge and Monastery of Serra do Pilar.

The Romans gave the city the name Portus, meaning port, in the 1st century B.C. Military, commercial, agricultural, and demographic interests came together in this place. Its continuous growth linked to the sea can be seen in its many and varied monuments, from the cathedral with its Romanesque choir to the neoclassical Stock Exchange and the typically Portuguese Manueline-style Church of Santa Clara. The urban fabric of the Historic Centre of Porto and its countless historic buildings bear remarkable testimony to the development over the past thousand years of a European city that looks outward to the sea for its cultural and commercial links.

Archaeological excavations have revealed human occupation at the mouth of the Douro River since the 8th century B.C., when there was a Phoenician trading settlement there. By the 5th century the town had become a very important administrative and trading centre. In the succeeding centuries it was subjected to attacks and pillage by successive groups, including Swabians, Visigoths, Normans, and Moors. By the early 11th century, however, it was firmly established as part of the Castilian realm. Expansion came in the 14th century with the construction of massive stone town walls to protect its two urban nuclei: the original medieval town and the hitherto extramural harbour area. The Historic Centre of Porto is located within the line of these Fernandine walls – named after Dom Fernando, in whose reign they were completed in 1376 –, together with some smaller areas that retain their medieval characteristics. This area conserves to a large extent Porto’s medieval town plan and urban fabric, along with some later monumental insertions as well as the two remaining sections of the Fernandine walls.

In this area many important ecclesiastical buildings are located, such as the cathedral – whose Romanesque core dates to the 12th century – and fine churches in various styles. The historic centre includes also a number of outstanding public buildings, including the São João theatre (1796 – 1798; 1911 – 1918) and the former prison “Cadeia da Relação” (1765 – 1796). Among the important later structures are Palácio da Bolsa (1842 – 1910) and São Bento railway station (1900 – 1916). This rich and varied architecture eloquently expresses the cultural values of succeeding periods – Romanesque, Gothic, Renaissance, Baroque, neoclassical, and modern. The active social and institutional tissue of the town ensures its survival as a living historic centre.

One of the social actors in the city is Associação Portuguesa para a Reabilitação Urbana e Proteção do Património (APRUPP) / Portuguese Association for Urban Rehabilitation and Protection of Cultural Heritage, which is a national NGO that has been following the transformation imposed on the site by recent interventions of rehabilitation and massive tourism. The gentrification process is now a reality to counteract and react, while the social changes along with the economic impacts are risks that should need to be monitored. For this reason, the protection of the cultural heritage of Porto through public awareness and good practices of heritage-related technical intervention is a key objective of APRUPP.

Due to the growth of tourism, the city of Porto is nowadays witnessing massive interventions in its built heritage. The current approach to adapt the built structures and “rehabilitate“ them for uses as the need for new infrastructure emerges, has led in many cases to the complete destruction of buildings except of the facades. These results often culminate in the loss of the architectural and construction culture at the expense of unnecessary demolitions with a high environmental impact. For this reason, the main objective of the training course will be to observe, map, document and use as an example the situation of a determinated area classified within the World Heritage site, with the purpose of raising awareness towards the public, the local communities and concerned authorities of the need to promote the protection of the historic urban heritage of Porto.

The training course aims to identify the state of conservation of the buildings in the area classified by UNESCO as a World Heritage site and the level of authenticity on the site while recording the transformation that it has undergone in recent times. The training course will engage the participants with topics that involve the promotion of good practices in heritage conservation and maintenance and the challenges of these endeavours caused by the neglect in the monitoring of the impacts of rapid transformation due to mass tourism.

The participants will take part in recording and mapping the different architectural elements on the designated area, using photographic recording and systematised data collection.

The documentation will be followed by roundtable discussions about results of authenticity assessment in Porto’s classified area and debates with experts.

To the architectural elements that will be in particular studied during the training course belong traditional timber-frame windows and tabique – interior partition walls. The course will include trainings in traditional techniques which are currently under serious danger of being lost. Thus the programme will allow the participants to learn not only about the historic relevance of these constructive elements of the built heritage of Porto, but also how to repair them and how to use the tools used for the process of repair and to apply the respective materials, such as the preparation of earthen and lime-based plasters. The trainings will be guided by conservators and craftsmen experienced in traditional techniques.

The training course will include several guided visits to locations of interest within the World Heritage site, to provide a contextual and historical reference to the work.

The training course will take place from October, 11th, till October, 22nd, 2021 and is organised by Associação Portuguesa para a Reabilitação Urbana e Proteção do Património (APRUPP) / Portuguese Association for Urban Rehabilitation and Protection of Cultural Heritage, in cooperation with University of Aveiro, Escola Gallaecia, Centro da Terra and European Heritage Volunteers and with financial support of the Municipality of Porto. 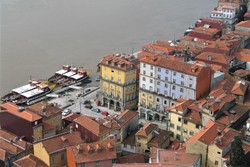