The project took place in Iturmendi, a little town in the province of Navarra in Northern Spain. Iturmendi is located in the valley of Sakana, 70 kilometers from the Atlantic coast and nearly in the middle between the cities Pamplona (50 kilometers), Vitoria (50 kilometers) and San Sebastian (70 kilometers). The town has only some hundred inhabitants and is inhabited by the Basque nation, therefore, both Basque and Spanish languages are spoken there. The name “Iturmendi” means in Basque language “mountain fountain”.

Sakana is a valley between two beautiful mountain chains – Urbasa and Aralar. Around 20,000 inhabitants are spread in fifteen villages located in the valley. Alsasua is the biggest town of the valley, just five kilometers away from Iturmendi. This area offers beautiful nature and nice summer temperatures. Mountains are only a step away and the Atlantic Ocean is also very close. Its Basque culture, food, people and many other aspects make of this region a place that is very worth to discover.

An ancient Roman road is crossing this area which was used for transport and trade throughout centuries – from the time before Christ to the 18th century. The old path had been for very long times the link between the oak trees forest of Sakana and the coast of the Basque Country. This commercial vein was in particular flowering during the 16th and 17th centuries when boats went from this region for whale hunting to Terranova, the Eastern coasts of Canada. Some of the whale products where transported through this road into the heartland, and in return the area was supplying the coast with oak wood to construct and repair the ships.

Probably, the trail was also part of the Camino de Santiago running from Bourdeaux to León and further to Santiago de Compostela.

The project focussed on the restoration of the historic trail.

The trail located between mountains and mostly crossing forests had been made from old flagstones, so called “cantos”. The stones are partly still visible, partly covered under the ground, partly they had been disappeared during the past decades. So it has been necessary to clean the ground, to uncover the stones, to fix instable stones and to replace missing stones by new ones.

The project has been organized by De Amicitia and Mancomunidad de Sakana, in partnership with European Heritage Volunteers. 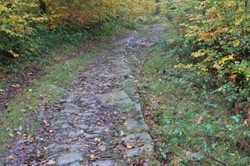 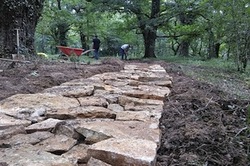