Maligrad, which means “small town”, is an island situated within the Albanian part of Great Prespa Lake close to the shore of Pustec, the municipal center of the Great Prespa area in Albania. The lake is one of the two highest tectonic lakes in the Balkans. The other one is Lake Ohrid which is just twenty kilometers away and is inscribed in the UNESCO World Heritage List.

The Albanian section of Lake Prespa however is also a natural wonder in itself. The Great and the Small Prespa Lakes create a National Park which was established to protect the natural and cultural heritage of the region and is included in the European Green Belt and the World Network of Biosphere Reserves under the UNESCO Man and Biosphere Programme. Biosphere Reserves are no classical “Nature Conservation Areas” as one might assume from the name “reserve”. In contrast to the concept of National Parks, which focuses on protection of natural processes, the concept of Biosphere Reserves puts the interaction between people and nature at its centre.

The transboundary Prespa region in the border area of Albania, Greece and North Macedonia, with its Transboundary Biosphere Reserve Ohrid-Prespa, is a good example of the close linkage between cultural and natural heritage. The whole region is rich in cultural heritage with a number of monuments stemming from pre-historic times over the middle Ages till 19th and early 20th centuries.

Maligrad Island, which measures approximately five hectares, is characterised by a rocky cliff covered with tree and grass vegetation and a sandy shore. With its diverse characteristics, it is home to a number of endangered and endemic species, such as the bats and birds living in the caves, and the emblematic pelicans which rest there in spring. Due the importance of its biodiversity, the entire island is part of the strictly protected core zone of the Prespa National Park.

Surrounded by a spectacular landscape of natural beauty, the island of Maligrad also stands out as an enclave of cultural relevance, containing important ancient vestiges that reflect the elaborate and wealthy history of Albania. Prehistoric drawings on the rocky cliffs testify to the long history of settlements in the Prespa area, and ongoing archaeological excavations on the island may reveal more on the history of this remarkable place.

The island is also home to the famous St. Mary Church, built in 1369 by Kesar Novak, a noble of Serbian origin, in a cave in the island’s rocky cliff. The church is a significant cultural monument administered by the Regional Directorate of Culture of Korça.

The church contains exquisite examples of religious art such as frescoes and also valuable documentary records in the way of Greek inscriptions dated to 1369. The Frescoes depict the family of Novak, and his Greek wife Kalia, providing an interesting window into the period. These examples of mural art are invaluable tokens of the past relevance of this area as a nesting ground of history in the midst of the Balkan region.

The project focused on the St. Mary Church and its direct surroundings.

The church was covered by temporary roof dating back to the 1980’s which could not guarantee the long-term protection of the building. More serious still, it endangered the stability of the whole church as a result of the weight of the roof being partly placed directly on the vaults causing cracks on the valuable frescos.

Despite the church being partly protected by the surrounding rock which creates a kind of cave structure, it was – depending on the direction of the wind and the intensity of rain – exposed to climatic influences with the existing roof not being able to provide adequate protection to the monument against water. Finally, the roofing was not strong enough to prevent damages of the building which might be caused by rocks that could fall from the cave under which the church is situated.

Before starting the interventions, the participants carried out a complete documentation of the current state of the edifice, as well as the frescoes of the main façade. After this was done, the frescoes as well as the most vulnerable parts of the building were protected from any potential damages that could occur during the interventions on the roof.

Afterwards, scaffolding had been erected at three of the four sides of the church. On the Eastern side, the space between the cave and the church was too narrow to do so; therefore adapted solutions had to be found.

As a first step the roof was dismantled. This process revealed the inappropriate structural conditions of the existing roof construction. Following this work, the existing roof construction was taken away. As a result of a detailed analysis of the wooden elements found, it was revealed that all used elements dated back to recent decades and that – unfortunately – during the previous interventions, all parts of earlier constructions had been removed.

Afterwards, the construction of the new roof was undertaken. The crucial aspect was to secure the basic beams into the exterior walls of the church and to design – in accordance with the constructive system traditionally used for similar cases – the construction in a way that the complete weight of the roof structure would be put onto the walls and not on the vaults.

Finally, the roof was covered by two millimeters thick metal plates. The decision to use this material, which is quite unusual for covering a roof of a church from the 14th century, was taken by the Institute of Cultural Monuments of the Republic of Albania for two reasons: On one hand there are no historic sources which could give clear evidence about the original roofing of the chapel; wooden shingles could have been possible, although for a church of this importance also copper plates could plausible. On the other hand, the biggest risk for the church is the threat that rocks could fall and damage the roofing as well as the church itself. This danger could be minimised by using a resistant roofing material. In result, the applied solution was to find a balanced compromise between the limited weight which can be laid to the exterior walls and a maximised resistance of the roofing against rocks.

In addition to the work on the roof, the participants carried out conservation works at the dry stone walls to the north of the church. Finally, the accessibility of the site was improved by repairing works at the pathway and the staircases leading to the church. Improving the access trail from the shore to the church helped make the island’s cultural and natural heritage more accessible and attractive to visitors.

During the project the participants had the opportunity to learn and apply techniques of heritage conservation, in particular in the field of traditional carpentry. The works were led by a master of carpentry experienced in heritage conservation with an additional education as “Restorer in Handicraft”.

In addition, the project provided the participants an insight in the complexity of problems at endangered heritage sites, the need to find flexible solutions, f. e. when the given space was not sufficient to erect the needed scaffolding, as well as the enormous logistic challenges for interventions at a site as this one.

In fact, since all tools, scaffoldings and other equipment as well as all material had to be brought by boat to the island and from the bank on a narrow path to the church itself and the material deriving from the previous roof had to be brought using the same way back to the mainland, around half of the working time had to be used for transport and related logistic tasks. In addition, the limited access of the island by boats going only in the morning and at the end of the working day caused the need for detailed and foresighted logistical planning.

In summary, the project was very successful in addressing some of the most essential needs of this important heritage site that is situated within a remarkable natural landscape. The conservation efforts led by the the KfW-financed project “Transboundary Biosphere Reserve Prespa – Phase II” of the natural and cultural heritage of Maligrad in general and the European Heritage Volunteers Project in particular, can be considered concrete activities that fill the Biosphere Reserve concept with life. Conserving the natural and cultural heritage, thereby attracting more visitors, lays a base for sustainable tourism and socio-economic development on a regional level, and establishes the area as a model region for environmentally and socially sound economic development.

The project was jointly organised in the framework of the Transboundary Biosphere Reserve Prespa Project by the GFA Consulting Group GmbH Branch Albania, the Directorate for Cultural Monuments Korça and European Heritage Volunteers, in partnership with the National Agency of Protected Areas Albania and the Regional Administration for Protected Areas Korça. 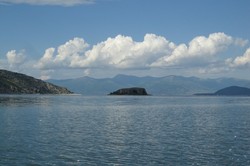 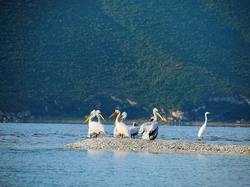 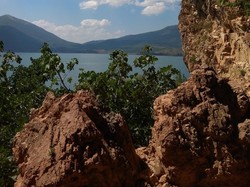 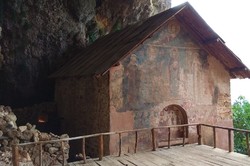 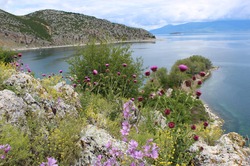