The European Heritage Volunteers Project 2019 was the continuation of similar projects that took place at the same heritage site in 2017 and 2018.

The project focused on the recultivation of the former hotel park. While restoring and cultivating over the period of several years further parts of the historic hotel park the old concept of “Parkwald” (“park forest”) should be regained und brought into presence. This concept, being founded during the first decade of 20th century solely in Freudenstadt, means a specific and delicate kind of cure and wellness infrastructure. The “park forest” idea had come out as a unique pioneer act made by the Freudenstadt town builders of those years.

The project included a conceptual und intelligent sweep of the green wilderness, which has captured the originally garden site. This means the clearing of small or middle aged trees and plants that are not typically for the park as well as the excavation of garden structures with century old origin currently covered by leaves.

In addition, the reconstruction of a historic path which had been started in the previous project has been continued. Finally, a sand stone wall that accompanies the main access path to the former hotel has been repaired.

All those measures help the city of Freudenstadt, its citizens and guests, to realise the enormous treasure of air-bath heritage and livelihood during the golden age, when this formerly rural town deep down in the woods became a world famous spa resort. In 2025, when Freudenstadt will host a half year “green exhibition” for the state of Baden-Württemberg, the hotel park shall contribute to the exhibition with singular and outstanding historic scenery.

The project has been organised by European Heritage Volunteers, in cooperation with Denkmalverein Freudenstadt (Freudenstadt Association for Heritage) and with support of the City of Freudenstadt and Evangelische Diakonissenanstalt Stuttgart (Evangelic Deaconess Organisation Stuttgart). 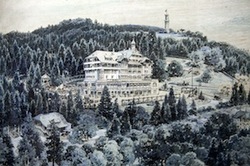 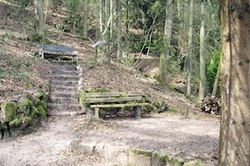 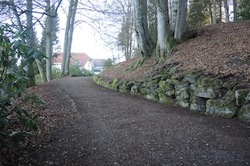