Originally, it had been planned to replace only the broken parts of the construction, but when opening the ceiling it became obvious that the beams had been made from cottonwood which is not appropriate material for roof construction. Therefore a new roof construction has been erected which follows the shape of the original one. The works have been lead by a master of carpentry who has additional education as “Restorer in Handicraft”.

Within the framework of the educational part other historic roof constructions in the village and the region – in the manor house itself, the village church and in the town nearby – have been studied and discussed.

The project has been organised by European Heritage Volunteers. 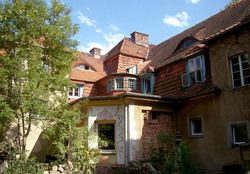