Lohra Castle is situated in the heart of Germany in northern Thuringia. The castle, which is surrounded by a scenic hilly landscape, is located on the edge of a natural reserve area. Being one of the largest castles in Thuringia, the history of Lohra Castle begins in the Middle Ages. Its architectural styles which have been preserved in the structures of the ensemble attest to a prolonged period of occupation and historical evolution up until today.

Lohra Castle is more than thousand years old, and it is a relic of German medieval past that is still standing at the heart of a region through which the story of the German nation has been written. Today, it includes twenty buildings from different time periods, showcasing this historical evolution to the enchantment of visitors and heritage enthusiasts: medieval fortifications, remnants of a tower from the 11th century, a Romanesque double-floored chapel from the 12th century, a manor house from the Renaissance period as well as stables and granaries from the 19th and the early 20th centuries.

The ensemble is situated in the midst of a beautiful forest. For decades Lohra Castle had been vacant. In the 1990s a civil society association started to rescue the castle and to revitalise it through cultural activities. This process of rehabilitation of cultural heritage not only brought new life and use to an otherwise forgotten monument, but it also provided with a new space where young people could reconnect with tangible heritage while valorising the relevance of preserving a historical monument. Since then, a large number of international workcamps, heritage volunteering projects, heritage training courses, seminars, exhibitions, concerts and other activities with international participants have been taking place every year in the castle.

However, when dealing with roof structures and roofing the priority is how best to protect the original substance against climatic influences and to avoid damages. The exteriors of a historical structure sustain the battering of the weather with frontal bouts of wind, rain, and snow. In the case of Lohra Castle, the structures are more directly hit due to its elevated location above a hill, a situation which has increased during the last years due to the influence of climate change. Its geographical situation places Lohra Castle in the line of stronger storms which have been rampaging over Germany in the recent years dropping copious amounts of water and blowing powerful gusts of wind. Understandably, even the robust structures of these historic edifices were not built to withstand such an aggressive onslaught by nature. Facing this increasingly unstable climate hazards posed to the historical structures, solutions are being thought to adapt conservation strategies into disaster risk planning. Preserving historic legacy for future generations is an important way to consolidate heritage conservation resilience.

Lohra Castle includes architectural relics from the Middle Ages onwards; between the 11th and the 20th every century had left its traces which are still standing tall overlooking the landscape of Thuringia. However, some of the structures are in need of conservation interventions.

The project in 2021 will be a continuation of the work started several years ago, and it will concentrate on the roof constructions and the roofing of the former manor house which dates back in its core to the 13th century and has an almost unchanged original roof construction from the late 16th century as well as on a 19th century barn house. The participants will be involved in tasks to help safeguarding these historical structures by replacing damaged elements on the wooden roof structures and the roofing.

The project will be led by a master of carpentry who has additional education as “Restorer in Handicraft”.

Within the educational part of the programme, an overview about historic roof constructions as well as an insight in techniques for their conservation will be provided. There will be further discussions about the challenges to balance the aim to keep the historic authenticity of wooden structures on one side with the pressure to adapt heritage sites to modern uses. These discussions will also include topics relevant for the work taking place on this historical monument, such as the directives to fulfil the requirements of energy-efficiency and fire protection, which will provide an insight into the European perspective of heritage conservation work. The educational programme will be completed by a guided visit to traditional timber frame ensembles in the region.

The project will take place from August, 29th, to September, 11th, 2021 and is organised by European Heritage Volunteers. 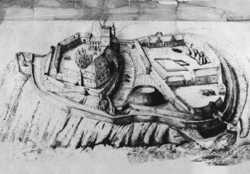 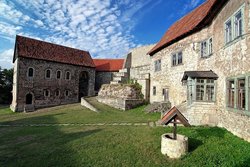