Effendi Villa is a cultural and architectural heritage site in Kobuleti, a sea ressort town in the Autonomous Republic of Adjara, Georgia. It is located on the coast of the Black Sea near the Lesser Caucasus Mountains not far away from the centre of Kobuleti. At the beginning of the 20th century this part of the town was a settlement called Pichvnari (“pine forest” in Georgian). The building is located about 100 metres from the seashore and surrounded with a coastal pine park. Effendi Villa was built at the turn of the 19th towards the 20th century by the famous public official, prosecutor of the Adjara region, Vasily Effendi, for his family.

After Georgia had become in 1921 part of the Soviet Union, some Effendi family members were exiled or executed, some emigrated abroad. Effendi Villa changed its original
identity and experienced new functional roles. The building hosted a public primary school, a vegetable storage and a children’s summer camp. Despite the rough exploitation, Effendi Villa has not lost its original appearance and still possesses a great historical, scientific, artistic and cultural value.

The dominating exterior decorative element of the villa is the late neo-classical porch entrance supported by two columns adorned with two lion sculptures on the bases. The portico is decorated with griffins, winged Goddess and Greek-Roman chariots in low-relief friezes, and topped with a balcony with massive railings and two huge vases decorated with carvings of Greek muses and Gods.

The building had been abandoned for several decades and had been subject to multiple acts of vandalism both indoors and outdoors: the facade of the building was badly damaged, elements of the interior and exterior were stolen, and the stucco decoration was partially lost. The exterior decorative elements in the lower part of the western windows suffered relatively large losses of decor; the most significant damages are on the reliefs and other architectural and decorative elements.

Since 2017 the Effendi Villa Association is engaged to rescue, conserve and revitalise the villa with the aim to develop it into a community space. During the last years comprehensive refurbishment measures have been undertaken what allows Effendi Villa to host cultural, educational and art projects, meetings and exhibitions for the local community.

Despite of the refurbishment measures of the last years, there are still comprehensive conservation interventions necessary, mainly concerning the exterior and interior decor of Effendi Villa.

The training course will be dedicated just to this topic and combine the documentation of the interior of the villa with practical conservation interventions at the exterior.

The documentation will comprise orthophotographic documentation, photogrammetry and technical documentation of the interior of the first floor which contents the richest decorative elements.

The conservation interventions will focus on the porch and the linked elements what will allow due to the diversity of the materials used there a comprehensive learning experience in the field of conservation-restoration.

The works will be led by a conservator-restorer from the Centre for Cultural Heritage in Belgrade / Serbia, a member of the European Heritage Volunteers network.

The training course will be completed by an educational programme dedicated to conservation-restoration practices on one hand and the conservation challenges of heritage sites from the late 19th and early 20th centuries in the region on the other hand, including a whole-day excursion to heritage sites which are in need of rescue interventions.

The training course will take place from September, 26th, to October, 9th, 2021 and is organised by European Heritage Volunteers, the Centre for Cultural Heritage Belgrade / Serbia and Effendi Villa Association. 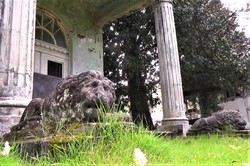 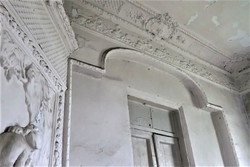 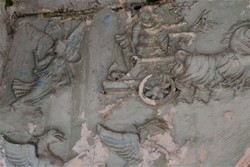